Mars rover will be looking at the product of a tiny N.H. company pretty much every day 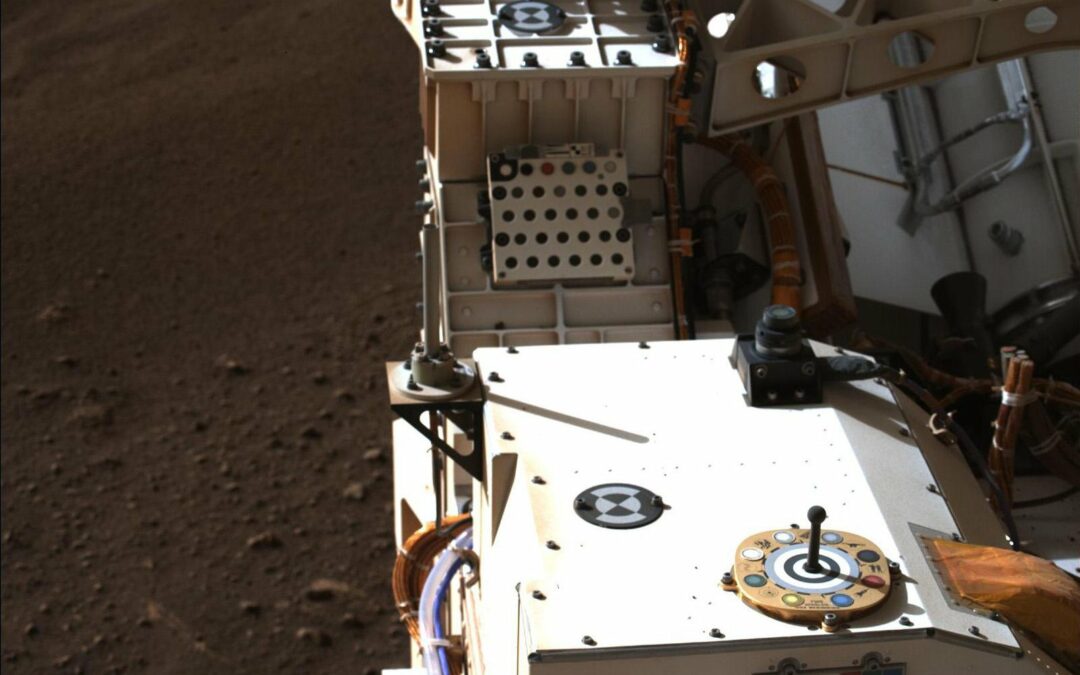 here’s a high-tech bit of New Hampshire on the Perseverance rover that NASA just landed on Mars, but to be perfectly honest, it doesn’t look very high-techish.

“You see that disk? We made all the white stuff,” said Art Springsteen, who with his wife, Kathryn, is founder of Avian Technologies, a tiny company in New London.

The disk in question is a calibration target the size of a small dinner plate, looking like a cross between a joystick and a child’s set of watercolors. Perched atop one corner of Perseverance, it consists a set of concentric white, black and gray rings surrounded by eight one-centimeter dots of different color. In the middle is a small pole that casts a shadow like a sundial.

Like calibration disks that are placed on virtually all camera-toting spacecraft, its purpose is to ensure that pictures beamed back to Earth are focused and have accurate color balance, so we know that if Mars looks red to Perseverance’s camera it would look the same red to an astronaut. The sundial was added for educational purposes.

Avian Technologies got the job to make the white portion for Mars because that’s part of what it does on Earth.

“We make optical coatings: white stuff and black stuff. The black stuff is used for things like edging on car windows and in optics, to remediate stray light. The white is really reflective over a wide range of wavelengths,” said Springsteen (who is distantly related to the rocker). “We’ve got a thermoplastic material that’s just for components in optical instruments. It’s the highest reflective material known, and it’s machine-able.”

Avian Technologies is a classic example of a company unknown to most people because it doesn’t sell to consumers; it makes things which enable other companies to make things. It makes coatings and materials and helps develop standards for the pharmaceutical, agricultural and optical industries.

Getting colors just right can be hard but is important for many products. To make sure it’s done right, manufacturers need something to compare colors against.

“One of the ones we sell is the Wendy’s bun brown,” Springsteen said. “When Wendy’s makes buns for their hamburgers, they color-match it by eye for this tile.”

Avian Technologies has eight employees, including the two owners – both Springsteens hold Ph.D.’s in chemistry – with annual sales of “a few million dollars.” The office and calibration labs are in New London and production is in Sunapee, while its color lab is in Rochester, N.Y.

You might have indirectly encountered one of their products in a hardware store, because they sell lots of chips with very specific colors to paint companies that get used to ensure the paint mixed in the can has the desired color.

That is a little better than the Perseverance contract.

“We probably made in terms of profit of this whole thing maybe a couple hundred bucks. We started working on this in 2016. It’s not going to make us rich,” he said. “It’s s bragging rights – hey, look at us!”

Appearance isn’t the only thing that matters for a calibration target; stability is vital. The white has got to stay exactly as white over the life of Perseverance, which if other Mars rovers are any guide could be a long time, and that’s not trivial on Mars.

“The problem? UV,” said Springsteen, referring to ultraviolet radiation, the short-wavelength radiation that causes sunburn. “The Martian atmosphere is very, very thin, and doesn’t have anything that absorbs the UV. Over time it would photo-bleach, it would bleach it out.”

Another Mars-specific danger is rocks from space “There are micrometeors that don’t burn up when they land, so it’s got to be hard,” he said. “Earth’s atmosphere protects things very, very well.”

Over the years Springsteen has created a lot of calibration materials for space, including on most Earth-observing satellites. This is the third time that Springsteen, 72, has sent something to Mars but it’s the first to land. The other two failed to make it, including material on the 1998 Mars Observer satellite that infamously failed to get into orbit because NASA used metric units while a contractor used English units.

That experience is how Avian Technologies got the contract. It was founded in 1999 by Art and Kathryn Springsteen, a chemist who once served as dean of faculty at Colby-Sawyer College, as part of a life transition. They’re happy to keep going even well into retirement years.

“I’ve been doing this since the ’80s. People say, give Art a call,” said Springsteen.