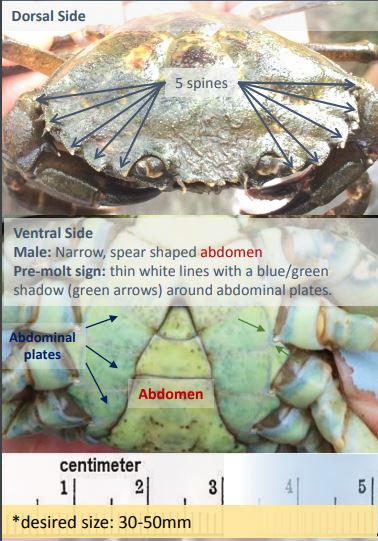 This is an invasive-species equivalent of those cards they handed out to people during WWII helping you identify enemy airplanes.

Green crabs are an invasive species on both coasts of the U.S. and are an increasing problem in New England waters. Because they’re edible, some people think this is the case where human greed could help – turn them into a delicacy and we’ll eat most of them.

An experiment in California, finds that killing most of them doesn’t help and might actually make it worse. From an article in SciTech Daily:

Some invasive species targeted for total eradication bounce back with a vengeance, especially in aquatic systems, finds a study led by the University of California, Davis. The study, published in the journal PNAS, chronicles the effort — and failure — to eradicate invasive European green crabs from a California estuary. The crabs increased 30-fold after about 90 percent had been removed.

Researchers in 2009 began intensive efforts to eradicate the European green crab from Stinson Beach’s Seadrift Lagoon. TBy 2013, the population had decreased from 125,000 to fewer than 10,000 individuals. But one year later, in 2014, the population exploded to about 300,000 green crab in the lagoon — a 30-fold increase over 2013 levels and nearly triple the pre-eradication population size.

“A failure in science often leads to unexpected directions,” said lead author Edwin (Ted) Grosholz, a professor and ecologist with the UC Davis Department of Environmental Science and Policy. “The world should get less focused on total eradication and work toward functional eradication.”

The problem with green crabs, it turns out, is cannibalism. “The study found the population explosion was due in part to the fact that adult decapod crustacea — such as shrimp, lobster, and crab — typically cannibalize younger individuals. When most adults were removed, juveniles grew unchecked and overcompensated for the loss of adults.”