Lumber prices are going bananas, so why aren’t my trees worth more? 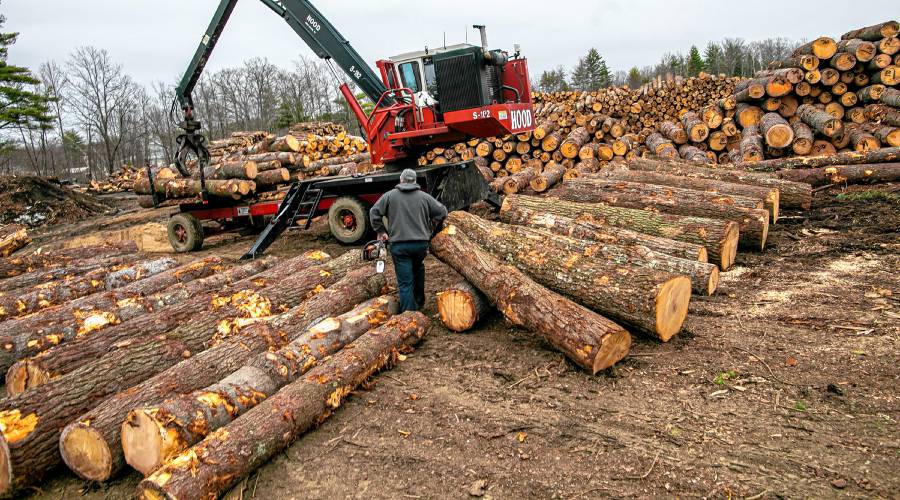 Bill Day from Oak Country Lumber in Chichester, N.H., gets ready to start up the log crane on Tuesday, March 30, 2021.

This article of mine isn’t exactly geeky but I thought it might be of interest nonetheless:

With lumber prices going through the roof from demand driven by pandemic changes, it seems like forest-filled New Hampshire should be reaping a windfall.

But issues from the global supply chain to manpower limits to tree-species distribution means the benefit so far has been spotty at best, especially for landowners.

“Not much of this has translated back to stumpage or standing timber. We’ve seen some slight increase but haven’t seen the type of price growth that lumber has seen,” said Jason Stock, executive director of the New Hampshire Timberland Owners Association.

There’s no question that demand has soared for 2x4s, plywood and lumber of all kinds. Bored homeowners are doing upgrades they’ve been putting off for years, while the flight from crowded cities has raised home prices in rural and suburban areas, spurring new construction.

The Federal Reserve Board says the price index of lumber and wood products almost doubled from April 2020 to February 2021, the sharpest rise since 1946, when the post-World War II housing boom kicked in. Any trip to your local lumber store will confirm that prices are spiking.

This has been a boon for lumber mills, although the pandemic has complicated their ability to take advantage.

“The demand for new pine boards just has been all-time record high. We can’t keep up with it,” said Bob Moses, president of the family-owned Britton Lumber in Bath, which sells to independent lumber yards rather than national chains.

“We’re getting phone calls from customers that we haven’t dealt with in a number of years, asking us for supply that we don’t have,” said Brian Moses, Bob’s son.

So why aren’t the trees in the forest suddenly worth twice as much?

One problem is that much of southern and central New Hampshire consists of hardwood forests, whereas the bulk of the construction industry uses faster-growing softwoods such as spruce or fir. Those softwood species become more common in northern parts of the state.

“Hardwood has been a different story,” said Stock, concerning lumber demand. “China is hands-down the No. 1 consumer of northern red oak, the most significant hardwood product grown in New Hampshire. The trade war with China has been a problem. … We have started to see kind of a steady recovery and a modest increase in hardwood lumber markets, but nothing great.”

“We sell a lot of cedar from the West Coast, but I’ve been warned kind of about that; it’s going to be harder to get,” he said. The problem is that the supply of pressure-treated softwood that can resist rot declined when COVID-19 shut down processing plants, and people turned to naturally rot-resistant cedar.

“The pressure-treated market drove the cedar market up last year; people couldn’t get pressure-treated or the price was so high that they would go to cedar. They’re using so much of it, it has affected the availability of that and has driven local prices of local cedar up. This year, I’m trying to plan ahead by buying more than I think I’ll need, but you can only spend so much on wood and only anticipate so much,” Mahlstedt said.

“We’ve done OK on the supply of logs; we work really closely with loggers,” said Bob Moses. “We actually have a record amount of logs on hand right now, because you don’t know what the weather’s going to be like and we wanted to make sure we had a decent supply.”

The real obstacle for landowners cashing in is that trees can’t get a piece of the action until they are sawed.

“As lumber markets have spiked, local mills have done what they can to capitalize on that. But until someone truly adds capacity – might be new kilns, new sawmill, a new line at a sawmill, a really major investment – they can’t just turn the knob and make twice as much lumber as they did yesterday,” said Eric Kinglsey, an industry consultant.

“I know many mills that are scrambling to add kiln capacity,” which is needed to dry out wood before it can be sold, he said. “That’s what is keeping many folks from adding another shift. They say, ‘if I can double drying capacity, it lets me add a second shift without adding much new equipment.’ But none of this stuff comes in a box from Amazon and you just set it up, so there’s always a delay.”

Milan Lumber Co. in Milan, the state’s biggest sawmill specializing in structural lumber, is in the midst of an upgrade costing at least $10 million that will include a new kiln and planing mill.

“There’s a brand-new mill in Enfield, Maine. I’m aware of at least two other entities looking to site new spruce-fir mills, for structural lumber, in northern New England,” said Kingsley. “But you’re looking at 12 to 18 months of permitting and construction.”

Expansion may also be limited by fear that the current boom is an anomaly that will fizzle out when people return to offices and move back to the city, leaving six-figure construction projects without enough business to cover the investment. Kinglsey noted, ominously, that the futures market for lumber is showing “a big drop on price at the end of this building season.”

There are other problems for timber owners trying to profit from the lumber boom, including one right out of Econ 101 classes.

“I think part of the reason is there’s a lot of timber out there to be harvested, so you’ve got a supply-and-demand dynamic that keeps those stumpage values from really skyrocketing,” said Stock, of the Timberland Owners Association.

Another problem will sound familiar to anybody following the New England logging industry: The decline of paper mills and wood-fired electricity plants has undermined the economics of cutting down trees.

On most parcels of land, most trees can’t be turned into saw logs, and even good trees generate a lot of “tops” and branches. Selling those to paper or power plants can make or break the economics of a logging operation; without that outlet, it may not be profitable to remove any trees at all.

“If you’re a logging contractor or landowner, only a third of what you’re growing can be lumber. If I’m getting nothing for low-grade removal, then I’m no further ahead,” said Stock. “The markets for low-grade timber are the worst that anybody can remember.”

This may change if new markets for low-grade wood develop, such as a planned plant in Maine that would turn chips into biochar, a form of charcoal that has huge benefits in locking away carbon and reducing climate change effects.

But for the time being, all the extra money we’re paying at lumber stores won’t be translated into much extra value growing in New England woodlots.

“There is a trickle-down to-landowners, but it’s an order of magnitude smaller,” said Kingsley.