NH video-game pioneer Ralph Baer will be on commemorative coin 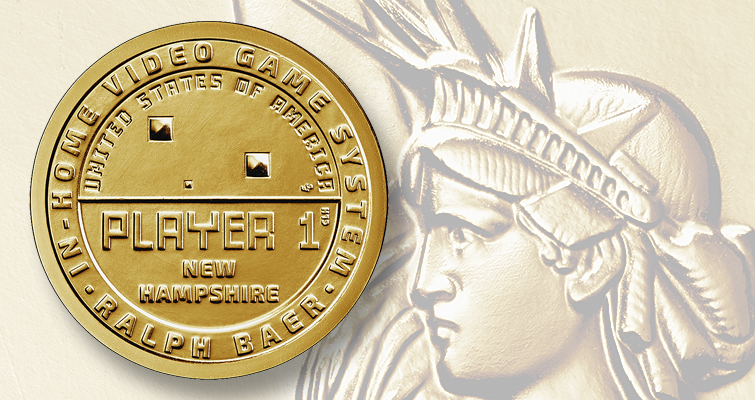 The Ralph Baer New Hampshire coin issued by the U.S. Mint. It is a memorial coin, not spendable currency.

The New Hampshire dollar reverse recognizes Ralph Baer and his creation of the first in-home video game console. The design depicts Baer’s brown box game. The left side of the coin features NEW HAMPSHIRE and PLAYER 1 on an incuse background. IN-HOME VIDEO GAME SYSTEM and RALPH BAER encircle the outside of the coin in a text that is meant to pay homage to Ralph Baer’s Odyssey game. The design of the coin is also symbolic of an arcade token. The design was created by U.S. Mint Artistic Infusion Program Artist Christina Hess and sculpted by Mint Medallic Artist Eric David Custer.

The American Innovation dollars will be offered in 25-coin rolls and 100-coin canvas mini-bags from production at either the Denver Mint or the Philadelphia Mint. The rolls will be offered at $34.95 per roll and the 100-coin bags at $117.95.

None of the dollar coins in the American Innovation Dollar Program will be released by officials for general circulation. The last dollar coin to be issued into general circulation was the 2011 James A Garfield, Presidential dollar. On Dec. 13, 2011, then Treasury Secretary Timothy Geithner issued a directive prohibiting officially adding any further dollar coins into commerce channels, because a glut of dollar coins held by the Federal Reserve filled contracted armored carrier vaults.