Hannaford says they no longer send any food waste to landfills 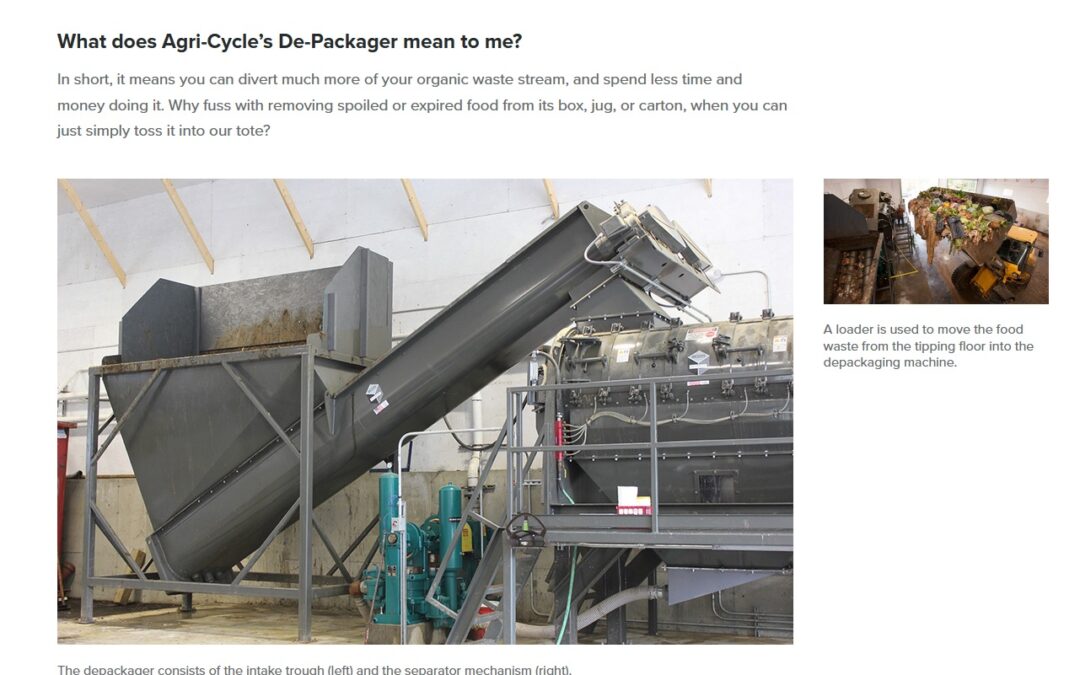 Agri-Cycle's website is very proud of their de-packaging machine. As they should be!

This story appears in today’s Monitor. As a longtime fan of composting I was attracted by the accomplishment but what really hit me was the “de-packaging” machine. I’d love to visit it!

One of the region’s biggest supermarket chains says it is no longer throwing any food waste into landfills after teaming up with a company whose machines can separate spoiled food from packaging before turning it into biofuel.

“That was the big hurdle,” said George Parmenter, sustainability lead for Hannaford Supermarkets, regarding what is called a de-packaging machine. “We couldn’t afford to pay people to scoop yogurt out of yogurt cups … to take food out of their containers.”

(The article in the Monitor has a number of pictures of Hannaford’s process.)

Hannaford announced Wednesday that all of its 183 stores in New England and New York are diverting all organic material from landfills, making it the first large-scale grocery chain in the region to do so. The company donates still-edible food to food banks, gives other food to farms to be used as animal feed, and ships off the rest, roughly half of the total of non-sellable food by weight, with a company called Agri-Cycle that turns it into electricity via anaerobic digesters at a Maine dairy farm.

“This would be a much more complicated task without Agri-Cycle, maybe impossible,” said Parmenter.

Hannaford says 65 million pounds of food waste was kept out of landfills in 2020 as part of its program. The company has been working toward the goal of no food waste in landfills for as long as a decade.

Parmenter said Hannaford has long had arrangements with farms and small operations to take food waste for composting, but that the variety of needs for each operation made this difficult to expand and maintain. Hannaford had as many as 27 different “composting partners” before switching to Agri-Cycle, he said.

Agri-Cycle’s origins can be traced back to 2011 when a pair of giant bacteria-filled vats were built at a dairy farm in Scarborough, Maine, to take the herd’s manure and turn it into biofuel that is burned to generate electricity in three 1-megawatt turbines. By 2014 the operation expanded to take food waste as well. Today Agri-Cycle collects food waste five days a  week to the facilities, as well as to  other  digesters in states as far south as Pennsylvania. Clients include Walmart, Whole Foods and Amazon Fresh.

A key component in their operation   was the development of “the de-packaging machine,” built around a series of paddles, screens and grids that break open cardboard boxes and plastic containers with spoiled or discarded food, shaking it out of them and plastic bags.

“The only thing we can’t handle is glass,” said Dan Bell, president and co-founder of Agri-Cycle.

A number of officials, including Manchester Mayor Joyce Craig, gathered at the Bicentennial Drive Hannaford on Wednesday morning to mark the event at a press conference and tour. The location was probably chosen because it is the supermarket where Craig shops.

Diverting food waste and other organics is important not just to extend the life of landfills but because rotting food releases greenhouse gases including methane. Anerobic digesters can use those emissions to create electricity that is fed into the grid.

In the press tour, store manager Carl Provencher detailed the processes that starts with precise ordering to reduce unsold foods, and includes removing baked goods and other processed food one day before their expiration date so they can be donated to programs like Families in Transition. The store follows the steps of the EPA’s Food Recovery hierarchy, a sort of upside-down food pyramid to minimize waste.

Out back in the 65,000-square-foot store, a number of wheeled 64-gallon cans are set aside to collect food waste, including material not suitable for composting such as meat, dairy, citrus and even liquid grease and fats. When filled they weigh 250 pounds on average, but that can vary.

“If it’s from the meat (department), it’s triple or quadruple what it is from the bakery,” said Gary Ledoux, maintenance lead for the store.

Agri-Cycle picks up the material twice a week at most stores, using one of two dozen modified trash trucks.

Hannaford pays Agri-Cycle to haul this away at a rate “on parity” with the cost of having trash hauled away, said Parmenter. A bonus, he said, is that the trash containers have to be hauled off much less often, reducing costs.