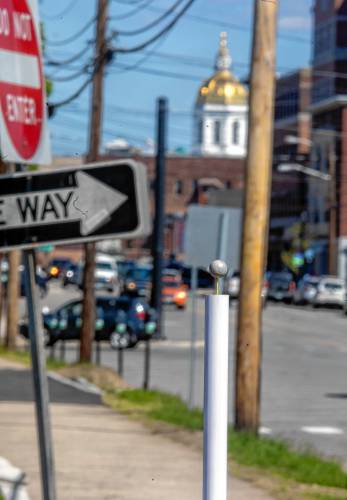 Stand in the right spot and the "moon" in the foreground will eclipse the State House dome - the "sun" in the background.

There’s something new in a parking lot on South Main Street. It’s a moon; specifically, our moon.

“It works quite well, I think, that post with the moon on it. It really lets you see what happens … in an eclipse,” said Rob Kramer, who got permission to put up the tiny (1-inch diameter) celestial object at the Ledyard Bank at 74 S. Main St.

Kramer is an anesthesiologist who has worked at Concord Hospital for a quarter-century. He has presented many science talks and projects at area schools and led the science club at Bow Middle School for years.

The eclipse installation is part of the unusual, perhaps unique, “planet walk” that he has installed in Concord and surrounding towns.

Such walks, common at science museums, space out scale models of planets in a line that extends yards, blocks or even miles, depending on the scale. People walk along it to get a better feel of how incredibly empty space can be and why it will take astronauts at least 18 months to get to Mars.

Kramer’s walk is different because it doesn’t have what he calls “false syzygy,” the astronomical term for planetary alignment.

Planets don’t line up in reality so his walk doesn’t line them up – instead, he presents the entire orbit for everybody from Mercury to Earth to the asteroids to Neptune (sorry, Pluto). Because of the scale, that puts the outer planets well beyond the city border, as far away as Mount Kearsarge. If you really want to walk those orbits you’d better put aside a few days.

Kramer has installed signs along the orbits at places where you can see the State House dome, giving an idea of what the sun would look like from the actual planetary orbit.

“Overall I’m very happy at how they have lasted through the winter. I had to replace a few signs, but not many,” he said.

His project, including the location of his signs, is described online and in brochures he has dropped off at some area stores and restaurants. Once the capital building opens up, he’ll have them there, as well.

Kramer also hopes to get some drone video footage shot, partly so that you can see what the State House “sun” looks like from the furthest orbits, where he doesn’t have an on-the-ground viewing spot.

Kramer’s website is called Wander The Play (wandertheplay.com) because he has written a play featuring four teens, parodies of popular songs, planets personified and astronomical facts amid jokes and puns. With the planetary walk done, that’s his real focus.

“I’m trying to get the play on stage. I’m writing to different schools to see if they to put it on,” he said.