Why do wind turbines have three blades? Why not just two? 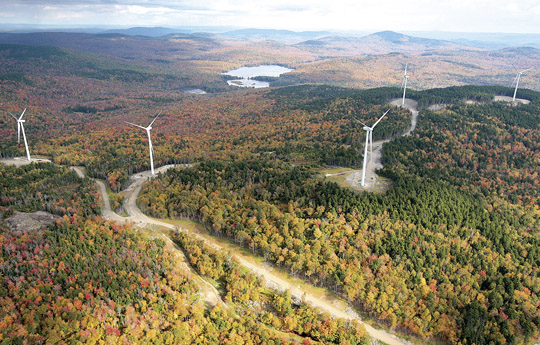 Lempster Mountain Wind Farm when it started operating in 2008; photo by Don Himsel.

I will go down in history as the person who asked the last question on AskSam, the NH Public Radio series in which reporter/podcaster Sam Evans-Brown answers listener questions. Sam is leaving radio to become a clean-energy advocate.

My question was: Why do all wind turbines look the same? You can read or listen to his response here. I pretty much knew the answer but Sam went into more detail than I knew and even hunted down the man responsible for the design. Very cool!

But he didn’t answer one question: why three blades? You want the minimum number possible to reduce construction costs – more blades don’t automatically produce more power because of increased drag, despite what many alt-energy tinkerers think – and a single blade would be so lopsided it would unbalance the turbine. bUT why not use two, which would be nicely balanced?

Fortunately I have a friend, Earle Rich, who worked on wind turbines in their very earliest days, including Altamont Pass Wind Farm in California, the continent’s first big wind farm. Here was around when this issue was being thrashed out through design and experimentation and here is his answer:

They simplest answer is that three blades will have uniform thrust on the generator as it yaws into the wind. A two bladed machine, as it turns on the tower to face the wind or tracks downwind, will have maximum resistance to yaw when the blades are parallel to the ground and minimum resistance when they are vertical. This extreme change will cause the tower to periodically torque and this is hard on ground mounting and guy wires, hard on nacelle bearings and other parts.

Three blades are a little harder to balance, with weight distribution root, center and tip all need to be considered. But, the advantages far out-weigh the extra cost of an extra blade and mounting hub.