That’s not a highway, that’s an Alternative Fuels Corridor 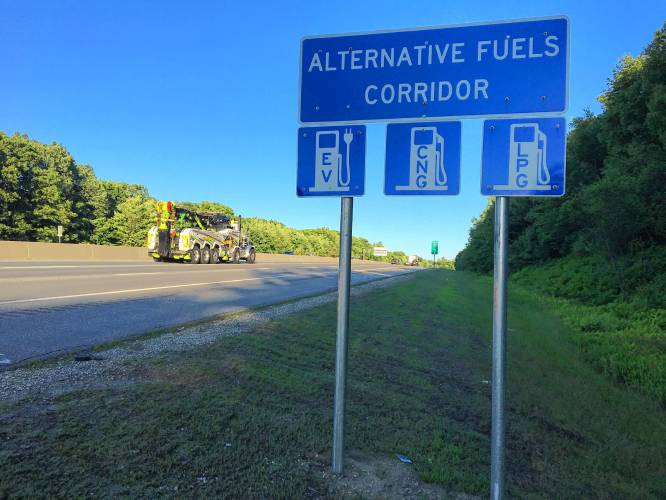 We Baby Boomers fixate on road signs but it’s not our fault. All our driving habits were developed before cell phones and satellite maps and digital voices warning that your exit is coming up in a quarter mile.

We braved the interstate highways when the only assistance came in the form of words in Highway Gothic font on green plywood next to the breakdown lane. So the digital generation can’t blame us for reading every single one of those signs as we drive along rather than staring at the dashboard touch screen like modern motorists.

That fixation explains why I pulled over onto the shoulder of I-93 southbound in south Concord the other day. I spotted a sign that I had never seen before and wanted to figure it out.

It told me that I was tootling down an Alternative Fuels Corridor, which sounds vaguely ominous, and included three gas pumps with strange acronyms: EV, CNG, LPG.

Because my life includes a depressing amount of time reading geeky energy articles, I knew what the acronyms meant – electric vehicle, compressed natural gas, liquified petroleum gas – but I didn’t know about the “corridor” designation indicated. It seemed a little surprising since New Hampshire is a laggard when it comes to electric vehicle charging compared to neighboring states. Among other things, we still haven’t spent the money from the Volkswagen “dieselgate” settlement that’s earmarked for chargers.

So I went to ask for guidance from Jessica Wilcox, a transportation specialist with the Department of Environmental Services. She coordinates the Granite State Clean Cities Coalition, which led the push for this designation along I-93 and I-95, with I-89 pending.

Alternative fuels corridors are designations by the Federal Highway Administration for those portions of the federal highway system that meet standards about publicly accessible places to charge your electric vehicle or fill up with a liquid made from natural gas or “petroleum gasses” like propane.

The Clean Cities Coalition supports these fuels because the two liquids produce less local pollution than gasoline while EVs produce no tailpipe emission at all, although they can increase power plant emissions.

For you and me, the only alternative fuel we’re likely to care about is electricity. CNG and LPG are mostly for commercial vehicles and fleets – Nashua, for example, uses CNG in its city buses.

At the moment, Wilcox said, the state knows of 3 CNG stations, 6 liquified propane stations and 129 EV charging locations. The latter are mostly at private businesses rather than in public areas like streets or parking garages. Concord has charging stations at four auto dealers and two hotels, according to the federal database associated with this program.

(A technical note: The corridor only acknowledges DC fast-charging stations that have both of the main types of connectors, CCS and CHAdeMO. Tesla Supercharging stations don’t count because other models cannot use them.)

What the Alternative Fuel Corridor signs don’t mean, unfortunately, is that you can leave the highway and quickly find a plug-in spot alongside a junk food emporium.

“This is more about educating non-EV drivers. It gives them a sense of wow, there are charging stations out there … even if you don’t see them,” Wilcox said. “A  lot of the participation is to fight range anxiety and the idea that there are not a lot of chargers out there. We need to get past this perception that there’s not a lot of charging available.”

EV charging stations will never be as common as gas stations but that’s OK; they don’t need  to be. Most people can “fill up” their electric car at home. In fact, it’s not uncommon for an EV owner to never charge anywhere else, which isn’t something we owners of ICE (internal combustion engine) cars can say.

Visible charging stations are important mostly for travel and tourism. “People coming into our state, trying to move around our state, will want to know they can (charge up),” said Wilcox. As the percentage of electric vehicles rises, obvious public places to charge up will become increasingly vital if we want Bostonians and Quebecois to keep visiting and leaving behind their money.

Switching from gasoline to electric vehicles needs to be done as part of society’s all-hands-on-deck fight against worsening climate change. It’s not a solution to industrial despoliation of the globe but it’s part of the solution. Anything that helps it along, even a little bit, is a good idea.