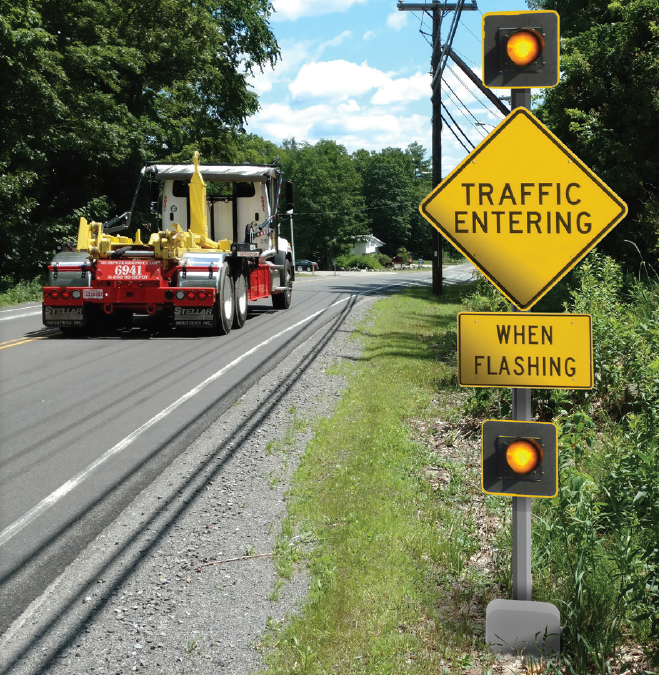 The state will soon be testing an automated method to warn drivers when another car is about to pull out into a busy street, and transportation officials want to know what you think about it even before it exists.

The system, known as an Intersection Conflict Warning System, will be installed this summer at three hazardous intersections in southern New Hampshire.  They are being placed on busy through roads that are intersected by many smaller roads: state Route 9 in Chesterfield, the two-lane portion of Route 101 in Peterborough, and Route 38 in Pelham.

Under the system, cars approaching the intersection on the side street are detected by an induction loop in the pavement. This causes a light to flash on the sign on the main road that says “traffic entering when flashing,” alerting any oncoming drivers.

The intersections in the year-long test were chosen through road-safety audits, said Mike O’Donnell, senior traffic operations engineer with the state Department of Transportation. Each had limited visibility of incoming traffic from hills, obstructions or curves in the main road.

Similar systems are used in a number of states but they are new to New Hampshire. Each costs about $140,000 per intersection, said O’Donnell, far less than the $250,000 or so that a full stop light signal would cost.

“That’s part of the pilot study, to assess whether the design is appropriate or needs to be scaled back or ramped up,” O’Donnell said.

As part of the rollout, the Department of Transportation has an online survey that it wants drivers to take even if they haven’t seen the system in action.

“We’re definitely looking for feedback from the public,” O’Donnell said. “There are two things we hope to get out of that survey: Do people understand what this means when they read the sign, and how well do they think this is going to work. … After they’ve been up for a year, we will do the survey again and see if people like them any more or less, understand them more or less.”

The systems will be able to generate alarms and alerts to the DOT Management Center in Concord so that maintenance crews can be notified of a possible malfunction. This will allow troubleshooting remotely and even the resolution of some issues. The pilot program is slated to run for three years.

An informational document online provides details about the systems. A five-question survey can be taken online.