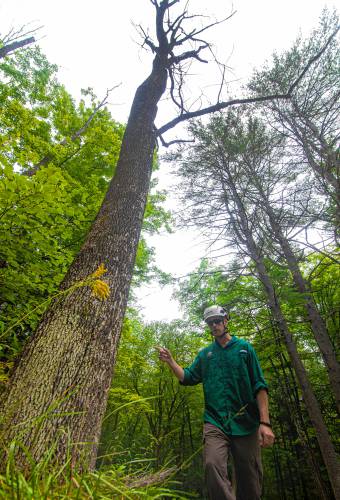 Gabriel Kellman points to the evidence of Emerald Ash Borer in a dead tree in Sutton on Wednesday, August 11, 2021.

Wildfires may not be destroying New Hampshire’s forests as they are in so many parts of the world, but there are plenty of other threats to our woods, including a bunch I can’t see.

“Here it is. See that?” said Gabriel Kellman, plant health division manager for  Chippers Inc., pointing to a tiny black dot that I might have been able to make out two decades ago.

It was an elm bark beetle that had burrowed under the bark of an elm tree, made visible because Kellman peeled away the bark with a drawknife, a tool that looks like a hand-held planer. The beetle’s larvae had dug some tunnels in the wood as they grew to adulthood. That wouldn’t be a problem except that they carry a fungus that causes Dutch elm disease, which has destroyed most of the elm trees that once lined many American streets.

“It basically clogs up the plumbing of the tree – water can’t get to the canopy,” Kellman said.

Then we went to an ash tree, one of the millions that is succumbing to the emerald ash border, and he pointed out trunk “blonding,” in which woodpeckers seeking out the larvae of these destructive beetles tear off the dark outer layer of tree bark. When you see blonding, he said, the ash tree is already a goner.

And then there’s the hemlock wooly adelgid, a tiny sap-sucking insect that has been making its way north as the climate has warmed, destroying hemlock forests as it goes.

“That is the one I’m most worried about,” admitted Kellman. “Hemlocks are one of my favorite trees. They keep streams cool for trout, other species – keep it cold, oxygenated – and there’s nothing good to take its place. I’m worried about that one.”

Kellman and I were going through this depressing litany in the yard around a lovely home in Sutton for a reason: August has been designated Tree Check Month by the New Hampshire Invasive Species Council, encouraging landowners to spot some of the myriad tree-killing pests that have become part of our ecosystem.

Not all introduced species are invasive, by the way. It’s only those that succeed so well they overwhelm existing species, causing ripple effects in the ecosystem, which are a problem. Most invasives can’t be stopped at a forest level but individual trees can be saved through pesticide application, if owners are willing to spend the time and money.

As an example he noted a handsome mature ash tree, probably two feet in diameter at chest height and a century-old, alongside the home of the property owner, who prefers not to be named in the Monitor.

“It’s worth saving –  where it is, the appearance, the effect it has in the landscape,” he said. Small tubes are pumping in pesticide that will be carried throughout the tree in the sapwood. This process will have to be repeated every other year forever, unless some ecosystem-wide solution to the beetle or fungus is developed.

Our conversation wandered, as conversations will, to include invasive plants, which even my aging eyes can see. Japanese knotweed, barberry, autumn olive, honeysuckle, buckthorn – the list seems endless, and that doesn’t include the aquatic plants. Some can be contained by being pulled up or smothered and a few biocontrols exist, but many can only be kept at bay through a frequent application of herbicide, just as invasive insects usually require a pesticide.

That isn’t a happy thought for those of us who grew up reading “Silent Spring” but it’s reality, Kellman said. Property owners either have to give up or prepare for some controlled counter activity.

Control is the key, Kellman. It is, of course, easier to just blast everything with the most powerful chemical you can buy, but that’s counter productive.

Another example are aphids. They are plant-killing pests hated by many gardeners, but in early spring they are a food source for other insects that you do want around because they eat pests, such as ladybugs. Kill off aphids and you kill off ladybugs, leading to an increase in pest insects later in the year.

“We’re not going to keep all pests and disease out of the landscape. For one thing, it’s not possible, but also it’s not healthy,” Kellman said. “Even in a tended garden … it might be a planted landscape but it’s still an ecosystem.”

The best bet, he said, is so make sure your soil is healthy because that’s the best way to keep trees healthy enough to deal with invaders: “Trees are adaptable to deal with a certain amount of damage.”

I winced when I heard that advice because getting soil tested is kind of a pain and my wife and I never get around to it. No excuse for that.

If you want to learn more about coping with all those darned invasives, whether in your trees or elsewhere, my advice is to contact UNH Cooperative Extension (start with extension.unh.edu/). They’ve got a ton of material and expertise and can direct you to commercial firms if that’s appropriate.