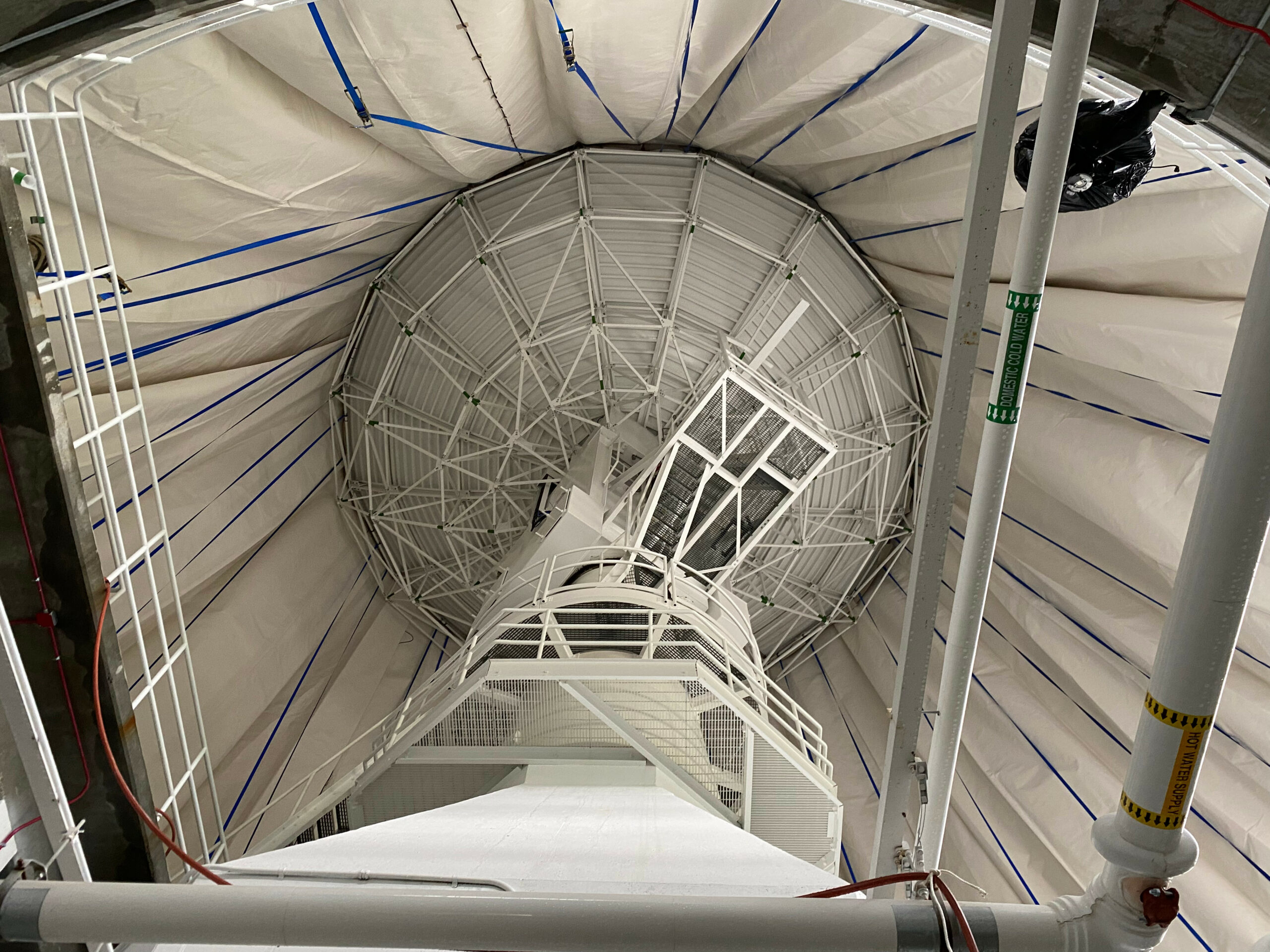 The 13-meter antenna at the New Boston Space Force Station after it was covered by a new dome in July. The inflatable dome, transparent to radio waves, protects the antenna from the elements and hides its orientation so it’s not clear which satellites it is tracking. Courtesy of US Space Force

No obvious changes have come to one of New Hampshire’s least-known military installations as it completes the transition from Air Force to Space Force, but the increasing importance of satellites, as well as the number of nations with launch capability, may affect its future.

“Space has been elevated to a war-fighting domain,” said Lt. Col David Zesinger, commander of New Boston Space Force Station, during a brief interview Wednesday as he escorted U.S. Sen. Maggie Hassan on a tour of the facility.

Hassan was touring the 2,800-acre facility, which dates to World War II and has been hosting satellite dishes since 1960, to get an update on its mission. The base was officially transferred to the Space Force in July although indications of its previous status remain, including warning signs posted all along the perimeter that say not to enter the “U.S. Air Force” facility.

“The Space Force is a central part of national defense,” Hassan said, speaking through a car window after a briefing in the base’s control center. She wanted to see the base in person, she said, to know “what the transition to the Space Force means for that mission.”

Zesinger said there have been no changes to personnel – about 120 staffers work at the station – since the change.

The base has a half-dozen radar domes that look like gigantic golf balls. These are flexible domes made of material that is transparent to radio waves, each covering an individual satellite dish used to track, communicate with and control scores of government and civilian satellites.

The base covers parts of New Boston, Amherst and Mont Vernon, and locals have long sought some public access to the base, virtually all of which is wooded and undeveloped.

Parts are open to military personnel, both active and retired, for recreation and hunting, including Joe English Pond in the center. Civilian access has not been allowed for decades, both for security reasons and also because of fears of unexploded bombs and shells left over from its original purpose as a training area for bombers flying out of what is now Manchester airport.

A major push to find and get rid of that ban took place around a decade ago, including the explosion of a 2,000-pound bomb found at the bottom of Joe English Pond, but there’s no indication that access rules will change.

“There is certainly a lot of interest in the area” about public access, Hassan said. “The important thing is to make sure it can fulfill its mission.”

The base was created in 1942 when the government bought out a number of farms in what was then a thinly populated agricultural area west of Manchester. It was used as a training ground for military pilots in what was then the U.S. Army Air Corps flying out of Grenier Field, now Manchester-Boston Regional Airport, until 1956. In 1960 it began service as a satellite tracking station.

The Space Force was created in 2019 as a branch of the military like the Army, Navy, Air Force and Marine Corps.