Indoor farming for salad greens keeps getting bigger in NH 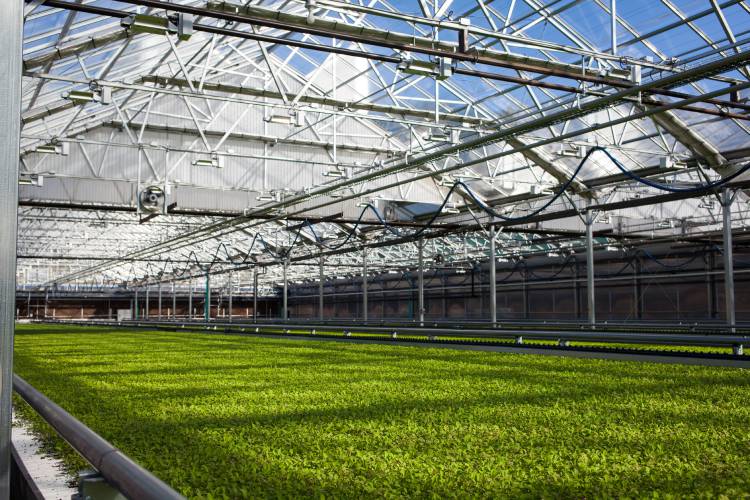 The region’s biggest greenhouse grower of salad greens, Lef Farms of Loudon, has been purchased by a national firm which plans to enlarge it.

Brightfarms operates indoor farms in Pennsylvania, Ohio, Illinois, Virginia and North Carolina. It says it distributes products to more than 2,000 stores in the US and has a target of expanding distribution to more than 15,000 stores by 2025.

As of Tuesday, the Loudon Planning Department says it has not received any applications for changes at the site.

Lef Farms was opened in 2017 by the owners of Pleasant View Farm on a former gravel pit on Route 106, using controlled lights, mechanized planters, conveyor belts and other mechanisms to speed production of leafy greens grown in a liquid medium rather than soil.

It is part of a small but growing movement for indoor hydroponic cultivation to increase local production, especially where land is scarce or expensive. Another example is planned for the city of Berlin, where a subsidiary of Massachusetts-based American Ag Energy plans to create a 22-acre hydroponic greenhouse on a former landfill.

This movement, which includes “vertical farms” in big cities, says it can better provide fresh food to underserved areas and grow produce in small areas while using less water and fertilizer than traditional farming.

Critics point to large amounts of energy use, since the greenhouse requires huge banks of LED lighting rather than depending only on sunlight, and to the fact that so far they are mostly limited to higher-priced salad greens rather than staple crops.

After it opened, Lef Farms ran into opposition from neighbors who complained that light coming up through the translucent greenhouse covers was annoyingly visible up to three miles away, leading to changes in the design of shades and other parts of the building.

The company sells to grocery stores and restaurants. For a time during the pandemic lockdown it sold directly to consumers via drive-up.

In August, Brightfarms was acquired by Atlanta-based Cox Enterprises, a $21 billion conglomerate with companies in multiple industries around the world.