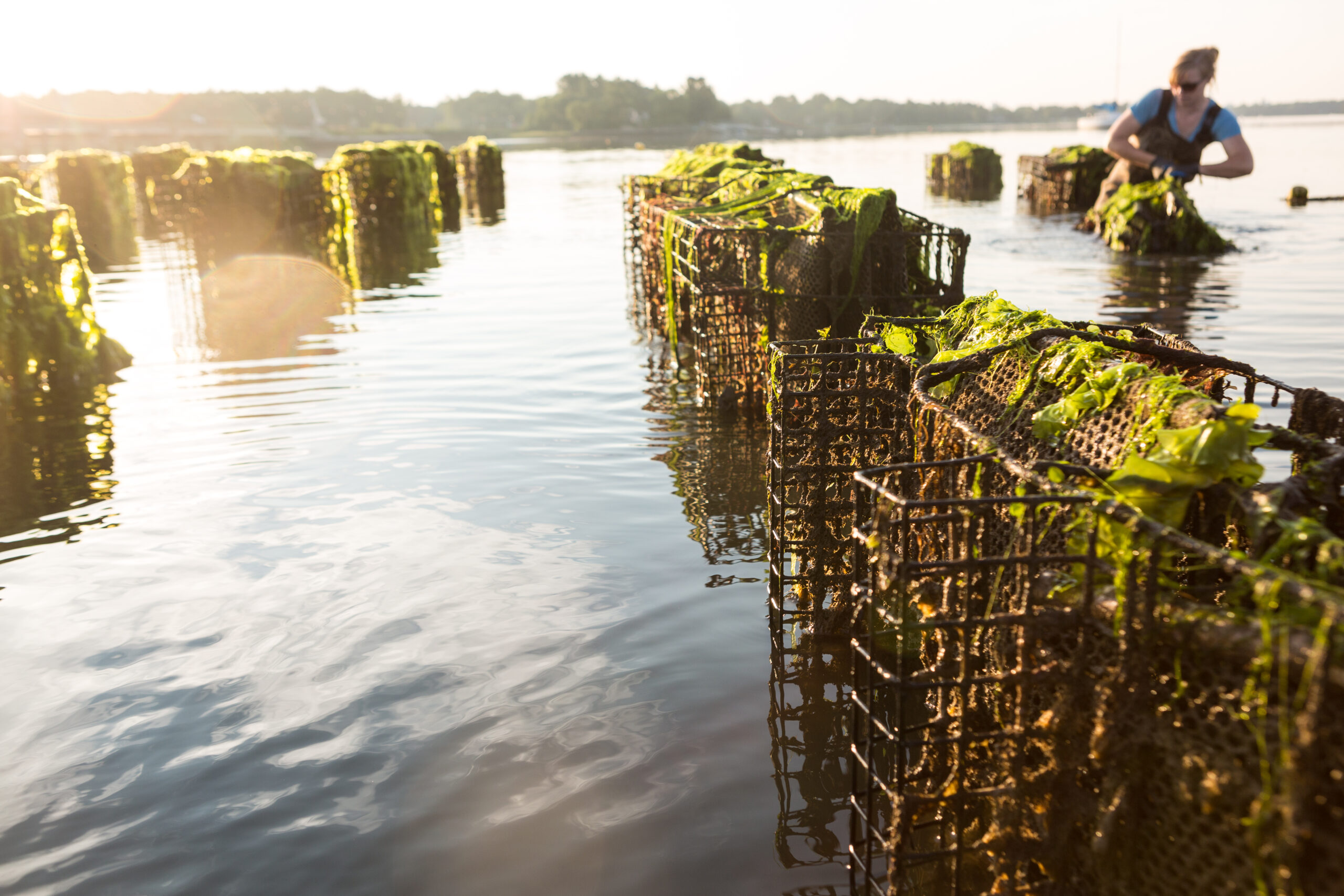 We tree-hugging types face a conundrum when it comes to our love of local food and farms because it’s easy for agriculture to be an environmental bad guy.

For example, I’m a big supporter of my local chicken farm – their automatic egg-sorting machine is a Rube Goldbergian delight – but its accumulated guano can cause water runoff problems if you’re not careful, and sometimes even if you are careful. And don’t get me started about our beloved dairy farm.

But oyster farming? No second thoughts are necessary!

Oyster aquaculture is a rare case of local agriculture that becomes better for the environment even as it become better for the farmer and the foodie.

“Oysters really help with water quality, they filter the water and take in particles,” said Kelsey Meyer, a PhD student in marine biology at UNH who is studying the effect of invasive green crabs on oysters, and who is also coordinator for the first Oyster Week NH. “Oysters are a win for everyone; delicious product while also helping with water quality in the Great Bay.”

Two centuries ago, estuaries along our little coastline were one of the Northeast’s finest oystering regions. All those little bivalves filtered millions of gallons of water, keeping the estuaries clean and balanced. As late as the 1990s, the Great Bay had 1,000 acres of healthy oyster beds, capable of filtering all the water in the bay in as little as three days.

But as is the case with so many ecosystems, we pretty much destroyed the whole thing. First we caught and ate most of the oysters, then we polluted and silted up and developed their spawning areas so they couldn’t return, then a disease called MSX came in and finished them off.

It’s been a tough slog bringing the oysters back. While there were once thousands of acres of harvestable oyster beds in Great Bay, Little Bay and the Seabrook-Hampton estuary, today there are almost no wild beds and just 74 acres of aquaculture oyster farms.

That might be kind of dinky by historical standard but it’s a huge increase from years past: hence Oyster Week New Hampshire, a celebration of state oyster farms that features farm tours, demonstrations (“live free and shuck!” is the slogan), a beach cleanup gathering, and a huge oysterfest on Saturday in Hampton Beach. Check oysterweeknh.com/ for details.

“A big reason why we want to do Oyster Week is to get the buzz going about these different local New Hampshire oyster farms,” said Meyer. “We really want to do everything we can to support them. People can learn about their mission, how it’s a sustainable industry, and how oysters are really important.”

Oyster Week reflects the way the industry is following the growth route used by local farms and breweries, emphasizing personalities and stories as much as the product. If you stumbled on the page showing logos of all the participating farms and didn’t know better, you’d think it was advertising the local craft-beer scene.

We’re not alone in trying to bring back oyster beds, incidentally. I recently visited a relative who lives on the Chesapeake Bay, which was once the world’s greatest oyster-producing region and is now furiously trying regeneration efforts before it all disappears. Massachusetts, Rhode Island and Connecticut have also woken up to the value of the thing they destroyed and are trying to turn the clock back.

As a side note, one of the issues in restoring oyster beds is that oyster larvae can’t grow if they lie in mud or sea grass or gravel. The free-floating larvae need to land on a hard, calcium surface after being released into the water by the parent oyster. Old shells left by a previous generation are the best landing place, but they’ve all disappeared or been covered by silt.

Among the restoration efforts has been a project to collect oyster shells from restaurants so they can be returned to the bay as potential landing spots. There is also genetic research going on to create oysters that can produce more meat or better survive amid many challenges, including the invasive green crabs that have drawn Meyer’s attention.

I must confess I’m not a huge fan of oysters as a food. I’ll eat them if occasion demands but that’s about it. But that’s OK because a lot of other people love them. If that indirectly helps keep the Great Bay great, then I say pass the Oysters Rockefeller.