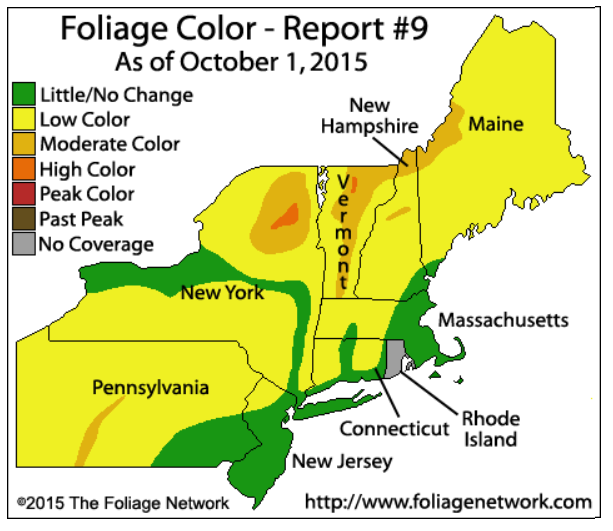 Leaves are certainly changing earlier than they were at this time in 2015.

It’s that time of year again, when everybody says, “The leaves are changing earlier than usual!”

This year the supposed culprit behind early leaf-peeping is the drought, which continues to be very serious throughout New England. Drought is a stress, and stress could cause trees to hunker down for winter sooner than usual.

It certainly seems plausible that they could be shutting down leaf photosynthesis so chlorophyll disappears and the underlying colors show up earlier than usual.

Plausible, but is it true?

It’s hard to measure widespread leaf color change, of course. UNH once had a program where aerial photos were subjected to color analysis in an attempt to quantify foliage season and see whether climate change was affecting it, but funding ended and I don’t believe it has been kept up.

(ADDENDUM: Here’s a 2015 column talking about that research, which had ended several years earlier.)

However there is another historical source: A site called FoliageNetwork.com.

From 2008 through 2019, this site gathered reports and photos from volunteers and compiled them into a weekly foliage map. Unfortunately, they stopped doing it this year – not enough volunteers, the site says – but unlike all the other foliage trackers I can find, they have left up the old reports.

So the Monitor downloaded the 10 most recent years to see what their volunteers said about leaf color in the general Concord area in the weekly report closest to Sept. 29.

Last year Foliage Network said we were on the border of moderate to low color change; the four years prior to that we were low color or even very low, with southern New Hampshire still green; the three years before that (2012 through 2014) we were showing moderate color and high color was just up the road; while 2011 was low and 2010 was moderate bordering on high.

Because we don’t have a 2020 report we can’t know how Foliage Network would judge this year but I’d say it’s definitely moderate, bordering on high. There are a lot of bright leaves out there.

If so, we’re changing color earlier than in six of the last 10 years and at roughly the same time as the other four.

So now if somebody tells you that leaves are changing earlier than usual, you have an answer: “That is 60 percent correct.”