NFTs are a hot (if weird) investment, so why couldn’t New Hampshire sell them? 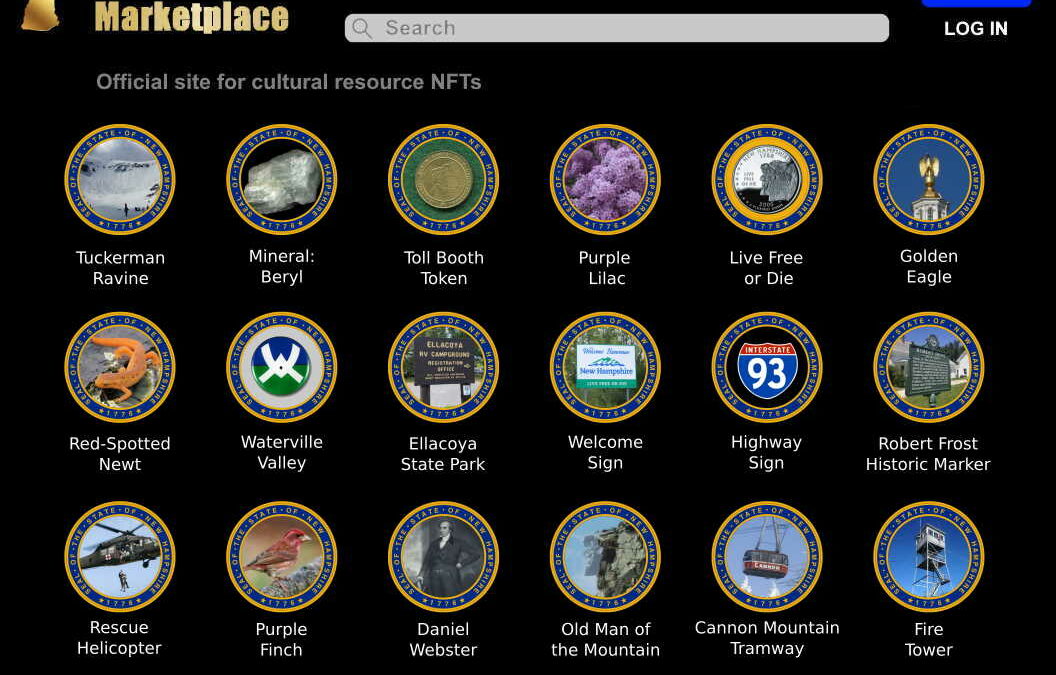 A state NFT marketplace could look something like this. Courtesy: Matthew St. Onge

How much are online bragging rights to “Live Free or Die” worth? A billion dollars?

Matthew St. Onge thinks that’s as good a guess as any, and he’d like New Hampshire to have a piece of it. Plus he wouldn’t mind a little bit for himself.

The Concord resident has suggested that the state government should start selling official versions of the newest and most unusual of investment items: non-fungible tokens, or NFTs.

These digital files, roughly equivalent to having a certificate of authenticity about something but not control of it, have taken the investing world by storm. Everybody from famous painters to Twitter stars to National Basketball Association teams are selling NFTs, sometimes for millions of dollars. Why not New Hampshire?

“I saw the NBA was selling little videos, people were trading them. I thought we could do that,” said the Concord resident. “New Hampshire has so many cultural items that people would pay for.”

St. Onge has sent a proposal to the governor and Executive Council showing how it could work, and put a version on the Concord Patch website.

Using examples from the NBA and OpenSea, an NFT auction house, he created a dummy website showing how New Hampshire could have a digital marketplace selling NFTs related to things with widespread appeal such as our state slogan, Tuckerman Ravine or the Old Man of the Mountain, as well as items of very focused interest.

“My favorite thing would be to buy a black diamond trail at Mount Sunapee. As a kid, you ski that trail, you remember it. It’s a high value to me, maybe not to others,” he said.

The files associated with the NFT would be as handsome as a digital designer could make them and stamped as official versions from the state for display.

Because of the digital nature of an NFT and its connection to the distributed ledger known as blockchain, New Hampshire would make money not just from the first sale of the NFT but from any subsequent sale. This is why NFTs have become popular with artists, who can profit when their work is resold.

“This marketplace will take on a life of its own. We just have to put ourselves in a position to take advantage of it!” ends his presentation, which includes the guess that “Live Free or Die” might draw a 10-digit price.

No official response has yet come, he said.

St. Onge is offering the idea freely although he wouldn’t mind making a little money out of it. Perhaps, he said, any sales by the state could be counted against his future taxes.

It can be hard for some people to get their head around the concept of non-fungible tokens. St. Onge, who is 53 and not any sort of computer programmer, admits it took him some effort even though he owns some bitcoin, a cryptocurrency that is also listed on the blockchain.

For an NFT, a “token” is a term for a listing on the global blockchain and “non-fungible” means it can’t be swapped for another token of equal value. So an NFT is a digital asset that cannot be altered and that has information about its ownership stored permanently and transparently on the blockchain network.

Because of that record each NFT is unique and unchangeable, even if the item that it points to can be reproduced endlessly.

“I think baseball cards are the most equivalent thing,” St. Onge said. Owning a baseball card doesn’t mean you own the player on it and doesn’t prevent many other people from owning an identical baseball card, yet people still value them.”

Owning the NFT of something, such as a picture of New Hampshire’s state bird, the purple finch, doesn’t mean you own the bird or even the picture. It also doesn’t prevent others from having that exact same picture since NFTs don’t carry copyright protection. But you’d be the only owner of the official state NFT about the purple finch.

Similarly, if New Hampshire created an official “Live Free or Die” token and you purchased it, anybody in the world could look at the blockchain and see that you were the official owner of the NFT of one of the best-known government mottos on the planet. Nobody else could say that.

But everybody else could still say “live free or die,” or emboss the phrase on a dishtowel and sell it at a farmer’s market, or use it on their campaign website while running for cemetery trustee. And it would still go on license plates. There would be, in fact, no practical effect to the purchase except that you would be the only person in the world to own the slogan’s official NFT.

That doesn’t sound like much value in traditional markets but it hasn’t kept NFTs from becoming a multi-billion-dollar market in what seems like no time. NFTs are even seen by some as a small but representative part of a digital revolution coming to all aspects of finance that could change economic practices as basic as spending, lending and ownership.