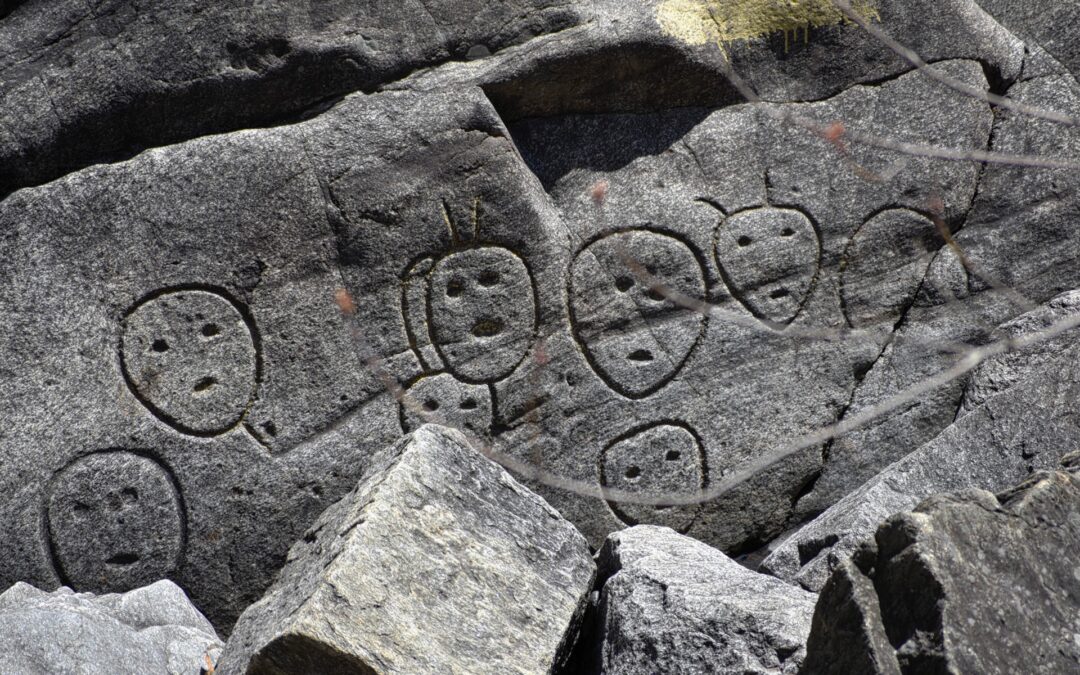 Petroglyphs carved as long as 3,000 years ago above the Connecticut River at Bellows Falls, Vt. Gail Golec—courtesy

When you’re an archaeologist, you know that there are rocks and then there are rocks. In his new book, Robert Goodby, a professor of anthropology at Franklin Pierce University, talks about a few that his team uncovered in 2009.

“We were in this quiet pine forest, dead level. Aside from tree roots it is an archaeologists’ dream: soil is dry, goes right through the screen – you almost don’t have to shake it,” said Goodby, discussing a dig at the site of what is now Keene Middle School. “All of a sudden we hit something that didn’t belong there. There were stones, just normal New Hampshire stones, (in size) from maybe a cherry tomato up to a softball … that had come from somewhere else, probably a stream bed.”

The intriguing thing about those rocks? “They were more or less in a line.”

The significance of this orientation didn’t come out until later when the archaeology team was analyzing all the data found at the site, including scores of stone tools, flakes from tools being made or shaped, and several collections of burnt bones, indicating the location of cooking fires.

One of the biggest problems facing our understanding of pre-Contact life in New England is that the people who entered this region after the glaciers receded 15,000 years ago did not create buildings out of stone, unlike cultures in the American Southwest or Central and South America.

Their houses, either long-term or transitional, ceremonial buildings and  gathering  places were made of woodland materials that rotted away centuries ago, leaving no trace. That’s a big part of the reason many of us think Native American culture was thin here and quickly eliminated by settlers, and why we don’t think much about it.

Goodby says that once a map of all the items from the Keene site was put together, it became obvious the stones had been pushed against the wall of a tent or tipi while people lived there, probably for one hunting season. Left behind when the family or families moved on, they and other stones accidentally marked out living quarters from millennia ago.

“When we put all the maps together, we could see the position, relative to the walls of the house,” Goodby said. “Then we could really zero in and ask questions. … How does tent no. 1 compare to tents 2, 3, and 4. It is an insight into the social life from the very first people to come into New Hampshire,” he said.

“(Archaeology and anthropology) is not treasure hunting; it’s about making connections. The reason people get into this business is not to find really neat artifacts … it’s to find something like the maps that lets you do that sort of time travel when walking into someone’s life, see something about their lives.”Looking at 13 millennia (and counting) of New Hampshire’s original residents

This story is one of many in “Deep Presence: 13,000 years of Native American presence,” the first book for a general audience by Goodby, 59, who has been doing local archaeological research with his Franklin Pierce students for two decades.

The 125-page book centers on four archaeological sites in the Monadnock Region where Goodby and his students worked, including one that did involve a stone structure which survives to this day, although it’s not a building but a V-shaped dam in the Ashuelot River.

Aside from providing a chatty but detailed look at how archaeology actually works in New Hampshire – including the surprising insight that “sites rich in artifacts are often less revealing than smaller, ephemeral sites where you can clearly see single points in time” –  it carries a deeper message: There was far more culture and people in New Hampshire before Europeans arrived than most of us realize, and the people and the culture are still here even if we’ve largely ignored or erased them.

“These people had a fully developed society as much as you or me or anybody … thousands of years ago. They lived in a complicated world, they had abstract understanding,” he said. “We have a tendency to use that term ‘civilization’ to describe any society that looks like us, but it’s more than that.”

The last chapter of the book, “Suvival, Resistance, Renaissance,” shows this deep history continues today. It deals with ways that Abenaki have had to work to stay in the Monadnock region, from putting down “white” on census forms to struggling for federal tribal recognition.

“There are many reasons for the near-invisibility of Native Americans in northern New England. Some of these have to do with the nature of the archaeological record they left behind, some are attributable to the erasure of Native history by the conquering culture, and some come from the survival strategies used by the Abenaki people to hide their identity from a hostile outside world and sometimes even from their own children,” he writes.

“A Deep Presence” was just released by Peter E. Randall Publisher in Portsmouth, with support from several historical and philanthropic groups. It is available at a number of local bookstores and through the publisher’s website.