In a Manchester park, a little piece of planet-wide species extinction 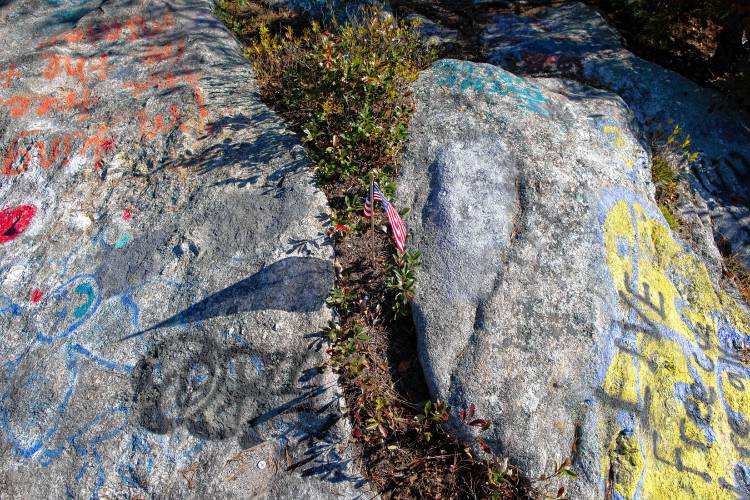 When it still existed, smooth slender crabgrass looked something like this, in Rock Rimmon in Manchester.

In the most unlikely of places – a hilly park overlooking downtown Manchester with as much broken glass and graffiti as trees and boulders – a small part of the world’s ecological crisis is about to play out.

If studies of samples from Mexico confirm what is suspected, botanists will soon announce the official extinction of an inconspicuous plant with the inconspicuous name of smooth slender crabgrass that once lived only in Rock Rimmon Park. It will be the first plant from New Hampshire and only the fourth in New England to be added to the grim and growing list of species that have been wiped off the face of the planet.

“It will be presumed extinct, that’s the term we use,” said Bill Nichols, a botanist with the New Hampshire Natural Heritage Bureau, during a tour Thursday of Rock Rimmon Park on the west side of Manchester. “You can’t prove it 100%. We hope that maybe on some outcrop in Maine, it might be discovered.”

That’s a slim hope. As far as anybody can tell, this species (Digitaria filiformis var. Laeviglumis) existed only in 140-acre Rock Rimmon Park, which rises 350 feet above the Merrimack River and is a surprising hotbed of plant diversity partly because of its geology that led to different levels of soil acidity. The park supports at least 10 vascular plant species at risk of extinction.

First seen and named here in 1899, smooth slender crabgrass was last officially collected in 1931 and has not been found since despite 25 botanical surveys, including 11 specifically looking for it. Nichols himself has been part of a half-dozen of them.

The only obstacle to declaring this plant globally extinct is confirmation that it is a distinct species from a similar crabgrass found in Mexico and Venezuela. That will be the call of Dr. Joseph Wipff, a renowned grasslands botanist, backed up by DNA analysis from Dr. Erin Sigel, collections manager at UNH’s Hogdon Herbarium. Nichols, who was checking his email Thursday to see if the report has come in, expects that they will declare the 90-year-old Rock Rimmon samples as a species all its own, although a species that no longer exists.

The loss of one type of small thin grass that looks almost exactly like many other types of small thin grass growing amid the boulders at one city park may not seem important, but the gathering of botanists and ecologists from state agencies and environmental groups for Thursday’s tour said that’s a mistaken belief.

“It’s hard to get people as excited about crabgrass as rhinos, but it’s just as important,” said Sean O’Brien, leader of NatureServe, an organization that supports biodiversity conversation efforts by groups and governments throughout the country. He was in Manchester as part of a national visit of sites to improve communication and connections among such efforts.

O’Brien cited a famous 1991 essay by scientist Paul Erlich that compared species to rivets on an airplane. “You can remove a rivet and another rivet and it won’t do anything but if you remove the wrong one, the wing will fall off,” he said. “We don’t know which (species) is that rivet.”

For himself, Nichols cautioned people not to be fooled by the small size of plants like smooth slender crabgrass, which can be differentiated from some other species only by examining it with a magnifying glass. Having a mix of what seem to be nondescript weeds is just as important to the environment as having a mix of different types of maple trees.

As for the surprising location of the rare plant, O’Brien also said it’s not uncommon for species to exist only in urban parks, citing examples he had recently encountered in Raleigh, N.C. Although such parks don’t seem very wild, he said, they are better studied and taken care of than remote locations so if they happen to have been created around a rare species, that species is more likely to be found and preserved.

As was probably inevitable with a tour built around extinction featuring people experienced with the ecological ravages of climate change, invasive species and habitat loss, Thursday’s discussion turned gloomy at times. New Hampshire has about 1,400 known native plant species and about 400 of them, well over a quarter, are being tracked as endangered or threatened.

But, the group noted, there are also successes – such as the northeastern bulrush, a sedge found in New Hampshire that was recently taken off the federal endangered species list as its population rebounded.

And in a telling reminder that it is possible to undo the damage of the past, as the group gathered in preparation for the hike up to the crest of Rock Rimmon, a big handsome bird flew directly overhead.

It was a bald eagle.