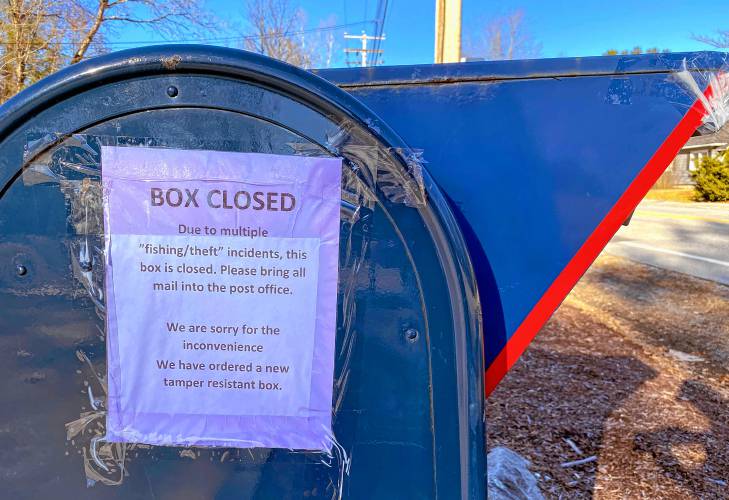 The blue mailbox in front of the Hopkinton post office on Route 103 in downtown Contoocook has a sign on it saying it is closed due to the mulitiple fishing/theft incidents. Geoff Forester/Concord Monitor

Some public mailboxes in the area have been closed after people reported that checks had been stolen, possibly having been “fished” out of the openings.

The investigation apparently began after reports of altered checks came to the Warner Police Department.

“We had people in town come in and report that their mail was stolen … their checks were altered” involving amounts of several thousand dollars, said Warner Police Det. Corporal Jonathan Adinolfo. “They discovered this because they had an overdraft fee, or were balancing and reconciling their checkbook. (The checks) were clearly altered. They would contact the bank – banks have their own investigative division – and contact us.”

“The common denominator was the Warner post office. … Several other post office boxes were also involved,” he said.

Theft of mail is a federal offense and is investigated by the U.S. Postal Inspector’s office.

“The local postal inspectors are aware of these incidents and are investigating,” wrote Emily Spera, spokesperson for the U.S. Postal Inspector’s Boston Division, in response to a Monitor query.

One possibility is that thieves lowered items into the box with string and pulled out mail, looking for checks. This system, known as “mailbox fishing,” has long been a concern with the Postal Service and has led to occasional redesigns of mailboxes.

“They are looking for items that contain checks. … They take the check written to whatever bill is being paid, they wash the check and keep the original signature, then write the check — usually it’s to a fake person — and increase the amount” and cash it, Adinolfo said.

Banks will often reimburse people in these cases, according to press reports.

The topic has been discussed on several community online forums, with some people reporting of “sticky material” around the openings of some public mailboxes, guessing that it was leftover from glue put on the end of string to snag letters inside the box.

To avoid the problem, mail checks or anything of value such as gift cards inside the post office rather than in the mailbox outside.

A defense move is to write checks not with a standard ballpoint pen, which has ink that can be removed without harming the check itself, but with a gel ink pen, which is harder to change.