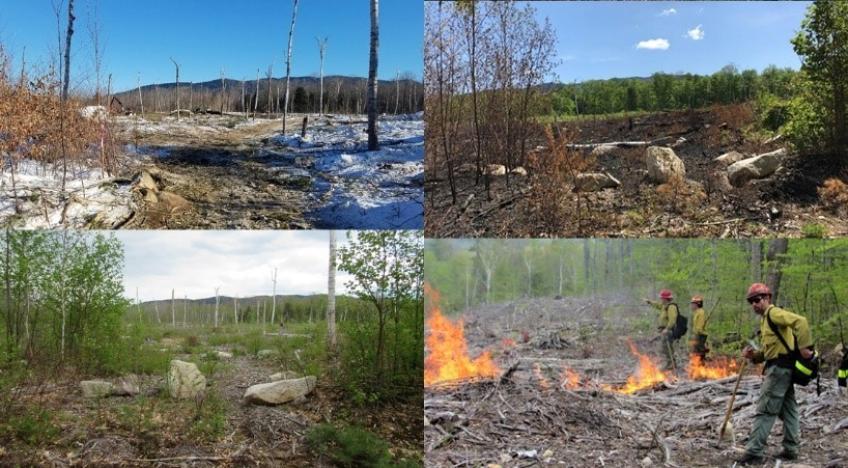 From US Dept. Agriculture: To break new ground in research on management of New England’s northern hardwood forests, an experimental forest on the White Mountain National Forest had to start by burning new ground.

Following the first-ever use of prescribed fire on the 90-year-old Bartlett Experimental Forest, scientists with the USDA Forest Service’s Northern Research Station are studying whether the burn helps regenerate desired vegetation and reduce woody debris that could eventually fuel a destructive wildfire.

“New England fire managers and silviculturists need locally based information on the effects of prescribed fire, particularly for slash reduction and woody regeneration,” said Mariko Yamasaki, a team leader and research wildlife biologist with the Northern Research Station and the principal investigator for the prescribed fire study. “This research may result in forest managers having another option for dealing with heavy slash loads, advanced beech regeneration and obtaining regeneration of desired species.”

Northern Research Station collaborated with the White Mountain National Forest and the Bartlett and Jackson fire departments to burn a total of 15 acres on three research plots over a 10-day period in spring 2021. Each of the sites where prescribed fire was applied was paired with a similarly cut, but not burned, control unit. The control units are part of a suite of ongoing vegetation treatments in which Forest Service commercial timber sales are creating a range of vegetation conditions over time to support studies on silviculture, wildlife habitat and ecology on the Bartlett Experimental Forest.

Over time, Yamasaki and her colleagues will re-measure established pre-burn transects to estimate slash reduction and subsequent woody regeneration on the burn units as well as compare burn units to the unburned control areas. “This study will give us new information on the role of prescribed fire in regenerating species composition and fuel load reductions,” she said.

John Neely, the South Zone assistant fire management officer for the White Mountain National Forest, developed the burn prescriptions for the Bartlett Experimental Forest and served as the prescribed fire burn boss. The dates for the prescribed fire were determined based on weather conditions. “Safety is the predominant consideration in planning a prescribed fire and we had to wait for a day that met specific guidelines for wind and temperature,” Neely said.