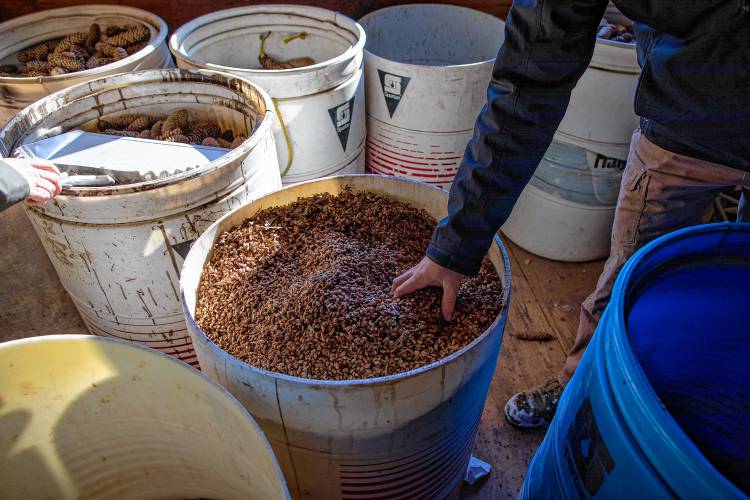 William Kunelius, the manager of the New Hampshire State Forest Nursery in Boscawen, holds some of the seedlings in the buckets at the nursery.

Of all the efforts being promoted to battle climate change, “plant a trillion trees” might be the most attractive.

There’s the alliteration, for one thing. Plus, everybody likes trees.

And planting enough trees to pull significant carbon from the air is something we could do without much effort because we’re in forest-filled New Hampshire, so getting enough seeds or seedlings to plant isn’t a problem.

Or so I thought until I visited a place I’ve long wanted to see – the New Hampshire State Forest Nursery in Boscawen – and talked to William Kunelius, the nursery manager.

“You hear ‘plant a trillion trees.’ That’s great! But the big question is: where are those trees going to come from?” he said. “Over the years, tree plantings have become less and less. A lot of nurseries out west have really shut down.”

Kunelius knows whereof he speaks. Since 1911, the state nursery has been selling bare-root seedlings, meaning they’re not in soil, to avoid competing with commercial nurseries. This year it will set a record for total sales, Kunelius said, involving more than a quarter-million trees and shrubs, hardwoods and softwoods and bushes and also mixtures of species such as the pollinator package, which is new this year and sold out almost immediately.

A quarter-million is a lot of seedlings but in the context of one trillion, it’s barely a rounding error. Obtaining a trillion trees to plant would require 4 million separate nurseries, each cranking out as many seedlings as Boscawen is selling.

And it’s not like you can turn a knob and start churning out more trees, as Kunelius made clear.

First, you collect seeds at the right time of year. The nursery collects many from its own orchards of trees around the property (the nursery has almost 900 acres, but most of it is open woodland), and also buys or collects many elsewhere. “The hard part is finding the seed sources. We like to plant seeds that are native to New Hampshire, primarily,” Kunelius said.

For evergreens that starts with collecting what I call “pine cones” regardless of whether the tree is a pine. (Arboreal identification is not my strong suit.) Sometimes they help out nature, such as a program of cutting off the tops of balsam firs which makes them look funny but increases the number of cones produced. Sometimes they use other tricks, as with the Norway spruce.

“Squirrels go up just before the cone is ripe. They’ll chew it off from the branch, let it fall on the ground, then run around on the ground, picking them all up and putting them in a big pile called a cache” in preparation for winter, Kunelius said.

Nursery staff say thank you very much and scroop them all up. “We basically go and raid the cache,” he added. “They get pretty mad.”

Getting seeds out of these cones is a multi-step process involving equipment that would fit into an antique farm display at Shaker Village, including a tumbler that appears to be made of scrap lumber, chicken wire and bungee cords. Not even the most penny-pinching of anti-government groups could fault them for wasting taxpayer dollars on that equipment.

A bushel of cones produces around 3 pounds of seeds, depending on the species. That’s a lot of seeds: There are 30,000 in a pound for balsam firs, for example.

After they’re cleaned and sorted they are either planted and put in a greenhouse to start growing, or placed in plastic bags and stored in a walk-in cooler for future use. Seeds last almost indefinitely there: Kunelius showed one bag dating to 1988, when he was three years old.

Even with all this care, Kunelius said 40% germination rate is pretty good. Then the seedlings are planted in the ground to be harvested between one and four years later, depending on the species and customer.

All this is assuming nothing goes wrong, but things go wrong all the time in the natural world. Root rot wiped out a tree orchard and left them with virtually no fir seedlings for several years. It’s now showing up in that orchard of topped balsam firs, which will eventually be uprooted and replaced with shrubs.

Once the seedlings are the right size, they’re uprooted with a Rube Goldberg-ish device and put in bags, 10 to 250 at a time, for sale.

My family has bought fir or spruce seedlings each year from the catalog for decades, planting them here and there around our property. While many have turned into ceiling-scraping Christmas trees, about half of them die. That’s another point: If you want a trillion trees that grow enough to pull carbon from the air, you need to plant 2 trillion of them. With climate change and invasive pests, you’d probably better plant 3 trillion.

This is not to say that we shouldn’t plant lots of trees. Of course we should!

Healthy forests have a ton of benefits above and beyond their work as the “lungs of the planet,” such as helping clean water, wildlife, logging economics and our own mental health. Plant trees if you can, and keep an eye on them as they grow.

But we can’t let the charming sound of “plant a trillion trees” fool us into thinking that it is the way to fix the damage we are doing to our atmosphere. It just can’t happen fast enough or widespread enough to do the work.

We’ve all got to change our habits, change society’s habits, change laws and regulations in a hundred ways to slow and reverse climate change, and keep doing it for the rest of our lives. Sorry, but that’s the reality.

And it won’t hurt to plant a few trees along the way.