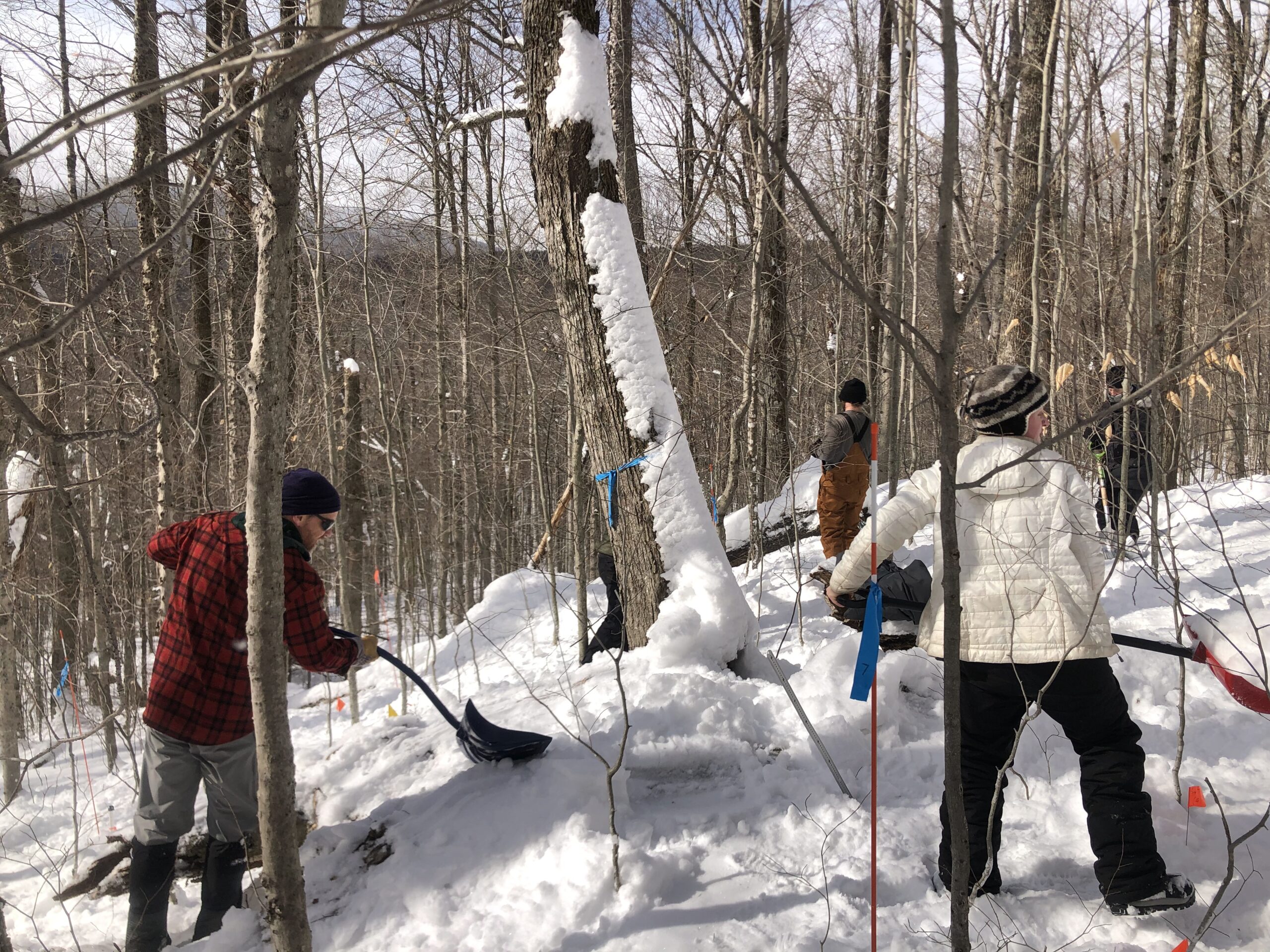 Team members shovel snow in Hubbard Brook Experimental Forest – 15,000 kilos of it, by one estimate – to set up a soil-nitrogen experiment on March 3. Photos courtesy of Brendan Leonardi / Hubbard Brook Research Foundation

It takes a lot of incentive to get people to go out into the woods and shift 15,000 kilograms (16.5 tons) of snow around by hand. Fortunately, scientific curiosity is a great incentive.

Earlier this month, six people spent three days at Hubbard Brook Experimental Forest, north of Plymouth, shoveling up carefully measured bits of snow and placing them on other carefully measured patches of snow. They did it over and over and over again until they had shifted roughly 300 cubic meters of snow, which by my calculation would fill 100 of those dumpsters you see in parking lots behind businesses.

The point of this odd-looking exercise was to help determine how coming declines in snowfall caused by climate change will affect one aspect of the soil, which in turn will affect the trees growing in it.

“With growing seasons getting longer, and atmospheric CO2 going up, it would lead us to think that forests would do better in the future, because those are things they like,” said Professor Pamela Templer, a biology professor at Boston University.

But New Hampshire’s forests have evolved to expect a certain amount of protective snow cover each year. If there’s less snow and the ground is exposed for a longer period each winter, the question is how that will affect the complex interaction between organic and inorganic matter that makes forests thrive.

“We know that the snowpack provides insulation for soils, acts like a blanket, keeps the forest floor warm in wintertime. People say ‘look at that beautiful blanket of snow’ – it has biological meaning,” said Templer. “Smaller snowpack in winter exposes soil to below-freezing temps … that damages tree roots, trees in general can’t take up as much water or nutrients, can’t hold onto as much carbon.”

That leads to a big question.

“Our concern is, what if they don’t have enough nutrients to make all that growth and carbon sequestration that we’re counting on possible?” said Templer.

There’s one way to find out: Mimic future conditions by moving snow around and measure what happens to the soil, particularly changes in the all-important nitrogen cycles between the ground and plants.

Over three days in early March a team of six people – three from Hubbard Brook, two from Boston University and an intern from Plymouth State University – moved snow at six locations at six different elevations within the 7,800-acre forest. The staked out 10-by-10-meter plots, left one-third alone as controls, and on one-third of the rest they removed exactly one half of the snow by weight and placed it atop the last third.

The idea was to both accelerate and delay the onset of the spring window, the point where snow melts enough soil biological activity begins, to see what happens.

Speaking as somebody who has shoveled more snow than he cares to remember, taking exactly half the snow off the ground – no more, no less – sounds like a royal pain.

“This was an unbelievable amount of work. Much more than we originally thought,” wrote Brendan Leonardi, program specialist at Hubbard Brook.

Templer is the principal investigator for this snow manipulation experiment, the person who designs and oversees an experiment and usually has to get the funding. The project, part of a roughly $500,000 grant, will last at least through next winter and perhaps longer.

As she explained, there will be weekly measurements of snow amounts, soil freezing via thermometers and in-ground tubes – “we’ll see really quickly if our shoveling has an impact on soil temps” – and then in the summer big field campaigns, sampling soils and roots and leaves to measure the response of trees to the treatment.

The results could be useful for everybody from global modeling of the effects of climate change to people deciding about what to plant in tree farms.

“We’re most concerned about sugar maples. Other species are less susceptible,” Templer said.

This experiment, incidentally, is just the sort of work that Hubbard Brook Forest was established 60 years ago to enable: field research in which our northern woodlands are manipulated in some way so we can observe the results over large areas and long spans of time. The much older Bartlett Experimental Forest near Attitash Ski Area in the White Mountains has a similar focus.

Hubbard Brook hosts scores of scientists each year from all over the place doing all sorts of things, from cutting trees to fertilizing soils to moving snow. It’s most famous as the place where acid rain was discovered and generates scads of research papers each year, making it one of the hotbeds of scientific research in New Hampshire.