Old hydropower buildings in Concord are still used – sort of 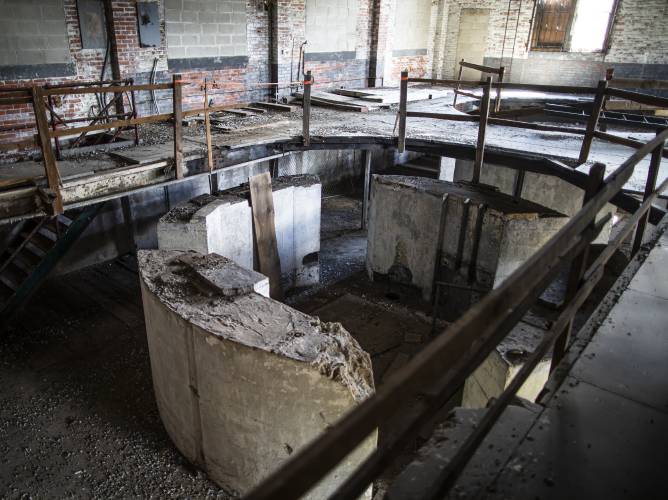 The casings where water from the Merrimack River would flow to produce electricity back in the late 19th century at the Sewalls Falls plant.

Two new buildings going up in south Concord near a host of hiking and biking trails will hold storage and maintenance facilities for some state agencies, including one that will be glad to move out of an often-overlooked bit of Concord’s history at Sewalls Falls.

Since the 1960s, the state Dam Bureau or its bureaucratic predecessor has occupied a couple of buildings along the Merrimack River that once housed one of the nation’s oldest hydropower plants, built in 1892 when three-phase power was still a novelty. Since the hydropower plant shut in the 1960s, the Dam Bureau has been storing everything from concrete blocks to chippers to dump trucks there, even as the place slowly deteriorated.

“The buildings are in poor condition, pose a hazard to those who work in them and are unsuitable for storage of much of our equipment and material,” wrote James Gallagher, chief engineer of the Dam Bureau, in an email regarding the facility.

The site is behind a locked fence at the end of Second Street, alongside some of the Sewalls Falls Park trails. Part of its problem, Gallagher noted, is that it sits in the floodplain. That means new buildings can’t be put there and ironically, “during large floods, when the resources of the facility would be most needed, the facility could be inundated and thus inaccessible.”

The new construction, which went through the city’s planning process, is very visible from I-89. It has drawn the attention of a number of Monitor readers who assumed that the wooded area was some type of conservation land. The 6.5-acre parcel is part of 17 acres on which the state Department of Transportation has a limited-access right-of-way, which apparently dates back to earlier plans to build a connection to I-89 in the area.

Two buildings are going up. One steel-framed building, at 22,719 square feet, will hold the Dam Bureau storage and maintenance facility; the other, at 6,875 square feet, will be used partly by the Department of Environmental Services’ watershed group to hold boats and testing equipment and partly used for storage and training by the DES group that responds to waste spills such as overturned oil tankers. None of the buildings will have regularly occupied offices, which will remain at Hazen Drive state buildings.

The $6.42 million construction is expected to be done by this summer.

Once the Dam Bureau departs, Fish and Game is expected to use the former hydropower site for equipment storage, said Corey Clark, chief engineering and construction engineer for NHDES.

The hydropower plant was once owned by Concord Electric Co., now part of Unitil. Opened in 1892, it used water held back by the world’s longest timber crib dam – a dam made of logs interlaid with stones and brick – that traveled through a channel dug by hand by Italian immigrants, portions of which are still visible today. It was one of the first power plants in the world to generate three-phase AC power, which had only just been perfected.

George Page, the man behind Concord industrial mainstay Page Belting Co., was the driving force behind the dam and hydropower plant, which he envisioned as the heart of an industrial complex. That complex never came to fruition but at least one business, Taylor Chemical Co., was lured by the promise of cheap electricity (plus tax breaks) to build there. A few remnants of its factory can still be found rusting away in the woods.

The hydropower plant went broke in the 1960s and the dam was breached by flooding in 1984. In 1987, the state bought much of the surrounding property for a recreation area, now part of the Sewalls Falls Recreation Area.