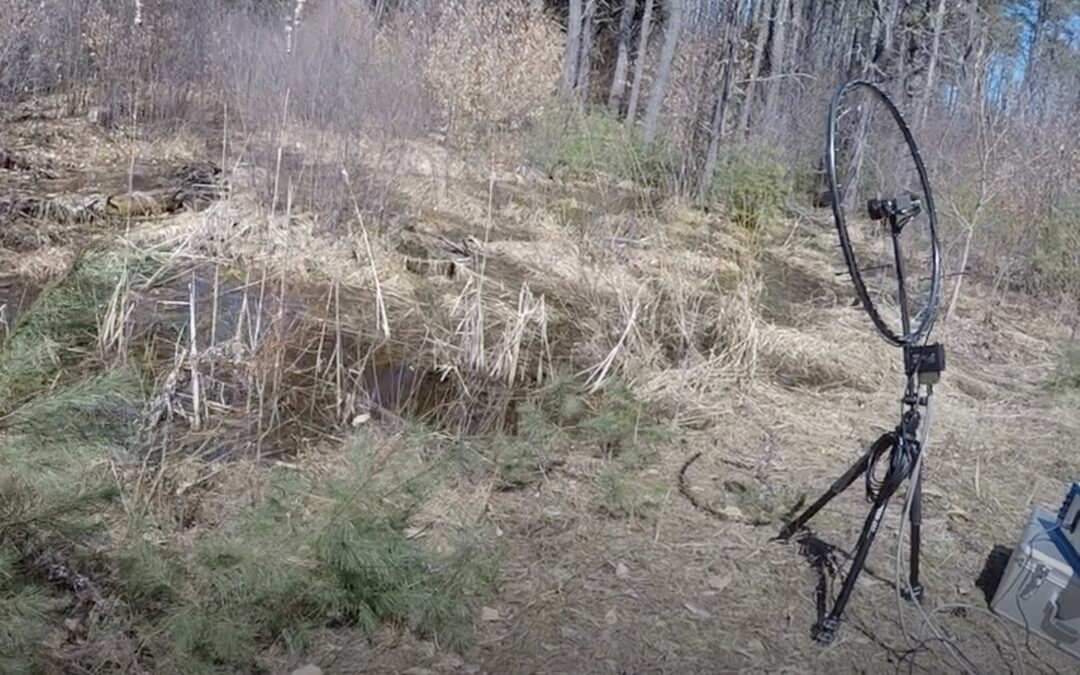 Researchers used an “acoustic camera” to separate individual frog songs from their choruses. In this video, heat maps showing the location and audio frequency of each song were overlayed onto images of the breeding pond. Photo by Ryan Calsbeek

The above headline is taken from the Dartmouth press release because I can’t improve on any headline starting with “sex secrets”. The web story (here it is) has a link to a video/audio recording showing this cool camera at work. NY Times Science has a story today too and it has better quotes (here).

Researchers using advanced recording technology have identified how individual songs in amphibian choruses may influence mating, according to a Dartmouth study.

The study of wood frog choruses is believed to be the first investigation that analyzes how individual songs contribute to group singing dynamics and the resulting mating opportunities in pond breeding amphibians.

The research, published in Ecology Letters, used an acoustic camera to extract individual songs from frog choruses. The findings indicate that females are generally attracted to songs in lower frequencies and that males time their songs to other chorus members.

“Individual contributions to animal choruses have been nearly impossible to understand until now,” said Ryan Calsbeek, an associate professor of biology at Dartmouth and first author of the study. “This research gives us deeper insight into the potential fitness implications of an individual’s song as it contributes to a bioacoustic signal that is produced by groups.”

Wood frogs, Rana sylvatica, mate in early spring when ponds to begin to thaw. Male frogs sing in choruses to attract females to the breeding pools. Once the female frogs enter the ponds, males compete to determine mating pairs.

The physical traits of males in choruses and the social structures within those choruses are believed to influence mating. Females, for instance, may expect to find certain male body types in choruses dominated by specific audio frequencies. Males, in turn, may choose whether to identify with frogs of similar or different body types depending on how that might influence their ability to find a mate.

Until now, the technical challenge of analyzing individual-level signals in a chorus of simultaneous singers has limited bioacoustic research of animals to group-level traits at the expense of considering individual variation in these signals.

“It has been incredibly difficult to understand how individuals are contributing to a chorus,” said Laurel Symes, assistant director of the K. Lisa Yang Center for Conservation Bioacoustics at the Cornell Lab of Ornithology. “Being able to focus in on individuals within the group is critical to understanding how choruses are structured and how group membership influences individual chances of attracting a mate.”

To understand how chorus composition and individual songs impact mating in wood frogs, the team used laboratory and field research focused on audio frequency and variance.

Frequency, the number of times that a sound wave repeats in a second, determines the pitch of a singing voice. Variance measures how much difference there is among the songs within a chorus. Because male body size determines audio frequency, more variable choruses should tell females that there is more variety in the size of males in that group.

In the lab, combinations of male wood frog recordings were played for both males and females. The females were found to be attracted to low frequency choruses nearly twice as often as high pitch choruses when variance was low. Males, by contrast, showed no preference for either low variance chorus type. Females and males both preferred low pitch choruses with low variance over those with high variability of sound types.

With the lab results indicating the influence of low frequency, low variance group singing on the behavior of females and males, the team moved to outdoor ponds to focus on the connection between individual songs and mating activity. They recorded natural choruses with an acoustic camera to identify each frog and its song. The numbers of eggs laid at each pond were mapped against the individual songs to estimate female preference for different choruses.

Males were found not to be choosy about the call frequencies of their neighbors, but they did time their songs to follow those of nearby individuals. Males were also found to reside nearer their closest neighbor in low variance choruses in what may be an attempt at positioning themselves closer to one another in anticipation of imminent competition for access to mates.

“It seems that the chorus calls are used to attract the female wood frogs to a breeding site,” said Calsbeek. “The individual songs play a role in positioning the male frogs within that site, but it then becomes a physical showdown to decide who mates.”

According to the research team, this is the first use of acoustic camera technology to study breeding behavior in animals. The camera’s directional microphones pinpointed the source of individual songs in the frog choruses and then overlayed heat maps of sound production onto videos of the ponds. The result showed the precise location and timing of frog songs within the chorus.

“This is the audio equivalent of picking out the trees from the forest,” said Symes. “The camera allowed us to record choruses of hundreds of frogs singing together, and then to extract the contributions from each individual male and analyze individuals calls as well as group dynamics.”

The study notes that factors such as environmental conditions, predation, and auditory mechanics require further study to determine the connection more completely between chorus and individual singing on mating decisions.