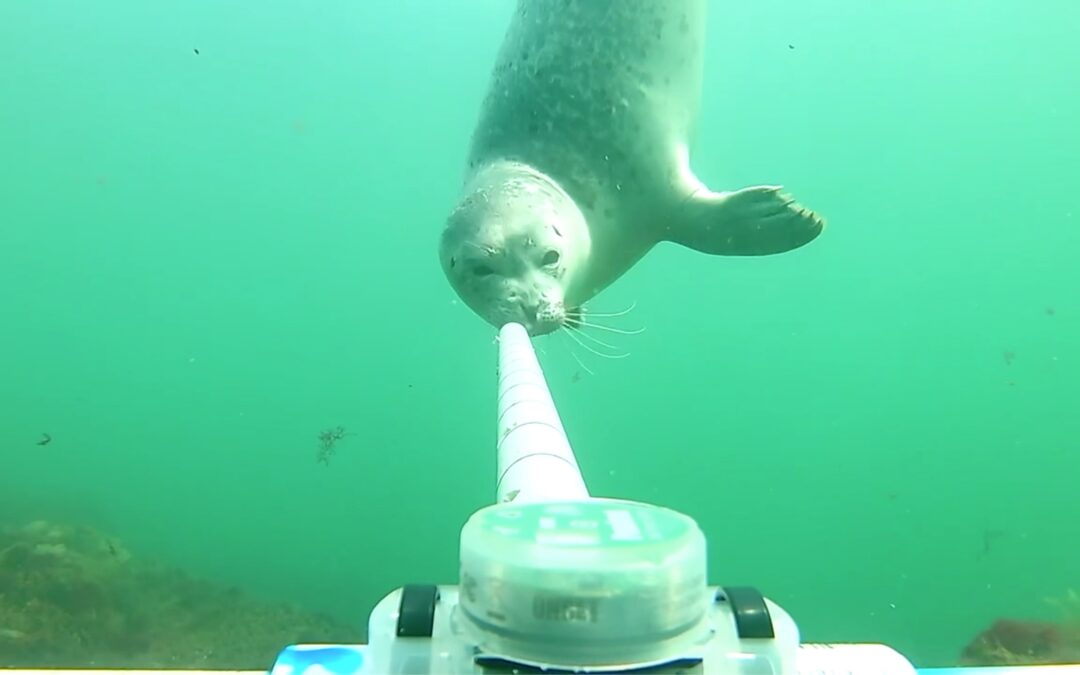 It’s hard to walk through New Hampshire woods these days without coming across at least one game cam, those automated cameras that take pictures or video when something passes in front of them.

Initially, it was hunters that popularized them, putting so many cameras on trees to find deer, turkeys and other game that legislators have passed laws to regulate them.

Then outdoor fans like me got the bug. I’ve used one to spot a handsome bobcat strolling past our blueberry bushes, hopefully en route to eating a lot of tick-carrying mice, and to discover that it wasn’t squirrels who were stealing nectar from our hummingbird feeder. It was a rascally raccoon.

But their most interesting use is by wildlife biologists. Automated cameras have become a valuable tool for understanding the world around us, from finding new species to documenting ecosystem change. Almost always, however, they’re on dry land.

That is changing in New Hampshire thanks to White and a team based at UNH’s Quantitative Marine Ecology Lab, the Coastal Marine Lab and the Shoals Marine Lab on Appledore Island. They’ve started putting 16 underwater cameras into the Great Bay and around the Isles of Shoals, partly to see what’s there and partly to figure out how best to use this ever-more-accessible technology.

“This is the first time it has been done in New Hampshire. A lot of it is experimental,” said White.

Experimental, as in sometimes painful.

“We’re breaking lots of contraptions. On the third deployment we totally smashed it against a set of rocks, broke everything. It took a lot of PVC (pipe), a lot of glue to get it going again,” he said.

Fortunately, this is a relatively low-budget affair. Take an off-the-shelf adventure camera, beef up the waterproofing a bit, build a PVC cage around and drop it from a small boat or from a pier, then haul it up a while later and see what was captured on the video card. Sometimes the camera has bait, if they’re interested in seeing whether predators such as sharks are nearby, and sometimes it doesn’t.

Even adding other equipment doesn’t raise the price too much. The cameras have temperature monitors, light sensors and sometimes hydrophones to record sound. “We’re trying to use (sound) to understand biodiversity as well. … Lots of fish, seals, creatures make sounds,” said White. “That has been done a lot, mostly on coral reefs. The louder a coral reef is, the more species are around.”

I learned about the project the same way a lot of people did, by seeing a video that White posted online showing a curious seal poking at one camera in an incredibly cute way. The team’s cameras have recorded a number of these oceanic equivalents to gallumphing puppies, coming to see the new thing resting on the ocean floor.

“We should have expected them, since seals live on ledges at Appledore. But we were focused on fish and invertebrates – didn’t even click with us that we’d capture seals,” said White. “They’re curious animals. They usually swim around it for several minutes, check it out and leave.”

More often – and this won’t surprise anybody who has a game camera – the video and photos capture little of interest. “I’ve got hours and hours of footage that has nothing in it. … Half of the project feels like an algae project; sometimes that’s all we get on the videos.”

White, who became an assistant professor at UNH last year, has worked with underwater cameras in Costa Rica and the Bahamas, where the scuba diving is a little more temperate. It was an easy choice to transfer that technology north.

“I went out to visit Shoals Marine Lab and I was just blown away at how amazing the institution was, also the ecosystems themselves. I said, I have to think up a project to work on, so I can spend time here,” he said.

Much of this year will be spent on figuring out how best to use the technology and establishing some baseline data on species for future research on how ecosystems are changing as the Gulf of Maine warms. Cameras in the Great Bay will be helping spot places for future oyster restoration as well as quantifying the effect of that horrible bivalve-eating invasive species, the green crab.

The latter is an example of the varying ways that underwater cameras can be used.

“We want to go up into river tributaries. There are a number of other interesting dive sites that we could deploy,” White said. “No matter what happens there’s going to be new species, new cool things to see.”