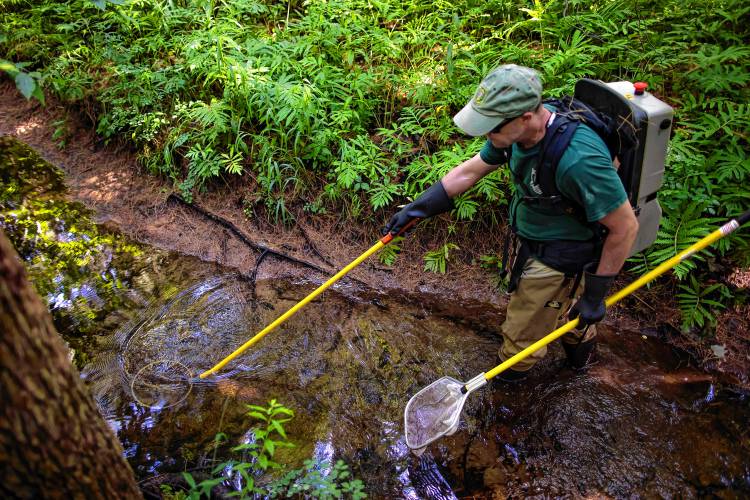 John Magee, fisheries habitat research and management programs coordinator at New Hampshire Fish and Game, ventures through a tributary to the Suncook River in Epsom, looking for trout to shock on Wednesday, July 13, 2022.

To see a lot more photos, check out the article on Concord Monitor here. (Subtle Richard Brautigan reference in that headline, don’t you think?)

Electrofishing has never been on my bucket list but I have to admit it has a certain appeal, especially if somebody else is carrying the equipment.

I recently learned about this activity, a standard part of aquatic field research but new to me, thanks to Eric Orff. He’s a retired wildlife biologist for New Hampshire Fish & Game and U.S. Wildlife Service who I have interviewed, off and on, for more than two decades, although he’s best known now for videos on his “What’s Wild in New Hampshire” YouTube channel.

Last week Orff invited me and John Magee, a Fish & Game aquatic biologist, to check out a small stream in Epsom where he and his son have long fished for trout. Orff is worried about the creek as climate change makes the weather more erratic.

“It never used to dry up. Three times in the last six years it has gone dry. You could walk down it in sneakers and not get wet,” he told us as we pushed through the woods.

Orff feared this means that no fish were are left in the creek – at least, no trout worth seeking. Hence the electrofishing equipment.

Electrofishing is a method of zapping the water with a quick electric charge to stun fish, so they float to the surface for a moment before recovering and swimming away, highly irritated. (No, you can’t use it to catch dinner; that’s illegal.)

It’s a quick and easy way to see what’s in a stream or lake that has been used by biologists and wildlife folk for many years with a variety of equipment from electro-boats down to one-person equipment.

Fish & Game conducts 200 to 300 electrofishing surveys in creeks and rivers each year, Magee said. “Much of the state is already done, but we have not completed areas of the upper Connecticut River, for example, and some other watersheds.” Some 20 to 30 surveys are done with electrofishing boats in warmer waters – “think bass, sunfish, black crappie.”

Magee’s rig was a 20-pound-or-so backpack, an old one with a lead-acid battery; Fish & Game has lighter kits with lithium-ion batteries. It was attached to a six-foot rod with a conductive ring at the end, as well as a ground wire the length of Indiana Jones’ bullwhip that trailed behind him as he walked.

“Don’t step on my tail,” Magee said about 30 times. I only stepped on it once.

This creek, which shall remain nameless for reasons soon to be obvious, runs under a busy road but you could drive past it 100 times without noticing it. I am not a fisherman myself and I have no idea how anybody could fish here without getting the line hopelessly tangled – the woods are fairly young, meaning the underbrush is thick – but Orff was nostalgic about the trout he has caught and released.

Magee started about 50 yards downstream of the culvert that carries the creek under the road. After adjusting the calibration – 350 volts was about right – we were seeing fish at the very first jolt. There were trout, some barely an inch long, just born this year, and others big enough to be worth frying up, and there were black-eyed dace.

At first Magee collected the fish in a bucket, to better keep track of what we found, but there were so many that he quickly stopped. This wasn’t a formal field survey; if it had been, we would have gone much more slowly to ensure completeness, measuring weight and length of fish along the way and possibly taking some samples for DNA testing.

Things got interesting when we neared the culvert. It’s a bad design because it is about two feet above the current water level, basically acting as a dam that blocks species movement up and down the creek. New Hampshire had thousands of similar culverts that chop up our waterways into short, discreet chunks instead of long, free-flowing channels, creating yet another obstacle to fish, turtles, newts and all the other freshwater denizens.

The falling water from the culvert had, over the years, gouged out a deep pool – too deep for Magee even in his waders. It was absolutely loaded with trout, including some big fat ones, which is why I’m not telling the world where we were. This pool is where the trout, who like cold water (above 68 degrees is too warm) lurked when the rest of the creek went dry. When the water returned, they spread downstream.

But not, we discovered, upstream. After crossing the busy road, a dangerous activity when you’re floundering in waders carrying a heavy backpack, Magee electrofished the creek and found only a few small dace.

Not a trout anywhere. The culvert had blocked them all.

Nonetheless, Orff was pleasantly surprised that “his” little creek hadn’t been rendered sterile by our increasing weather pattern of sometimes flooding and sometimes drought, with the happy medium getting pushed aside. But he knows he can’t count on this continuing, that at humanity’s current rate things are going to keep getting worse and worse.

The solution isn’t fun, he admits – it’s politics. He’s frustrated by lack of federal action to reduce the damage to the climate, but New Hampshire state action has been lacking as well. And there’s plenty that towns and cities need to do at the local level, from allowing denser housing and mixed-use development to slashing government energy use, but they won’t do it unless residents demand it. So start demanding!

In the meantime, happy fishing.

You can see Orff’s video from our trip on his YouTube channel. It includes just the right amount of me – slightly less than two seconds. The easiest way to reach the channel is through his website, which includes other discussions of the state’s outdoor life, at nhfishandwildlife.com.