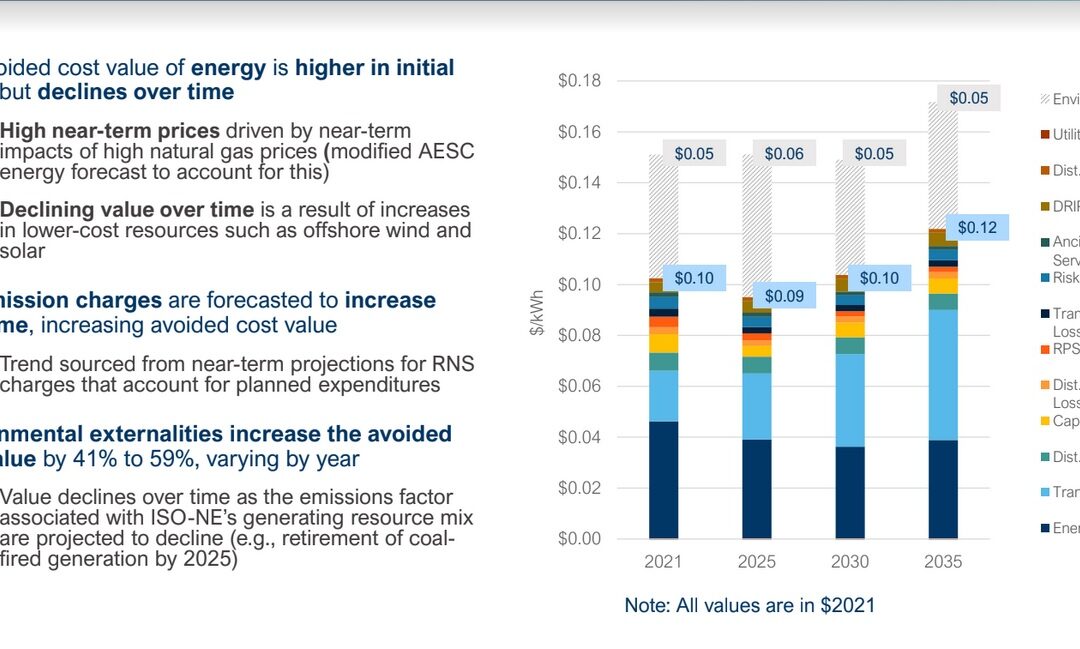 Rooftop solar panels slightly increase costs for other utility customers in New Hampshire but bring a big financial benefit to the system as a whole, according to a study that will guide the state’s future decisions on how much to pay customers for the solar power they generate.

The study was commissioned by the state Department of Energy to bring some clarity to a debate that has long swirled here and elsewhere: Whether solar panels on roofs and alongside buildings increase or decrease everybody else’s costs.

That question is central to decisions about net metering, the system under which owners of solar panels are paid for electricity they send into the grid rather than using themselves. Next year the state Public Utility Commission is slated to decide whether to change net metering tariffs or other systems of support for solar.

New Hampshire is generally a solar laggard. Through the first half of 2022, the Solar Energy Industries Association estimated that 184 megawatts were installed in the state, less than half the amount in Vermont and less than one-third the amount in Maine.

The debate about solar’s effect on costs goes like this:

Critics, including Gov. Sununu, say rooftop systems indirectly add to the bill of other customers because they reduce the amount that solar customers pay utilities to help maintain the grid, forcing others to pay more. This argument is known as cost-shifting. The state statute governing net metering says cost shifting should not occur to “an unreasonable degree.”

Supporters argue that rooftop solar and other distributed energy systems indirectly lower everybody’s costs because the electricity is mostly used on site and doesn’t add stress to poles, wires and other transmission equipment on the grid. Replacing, upgrading and expanding that equipment is an increasingly large portion of everybody’s electric bill.

Solar also reduces the need to buy fuel to operate power plants – in New England, that is usually natural gas, the soaring price of which has led to soaring electric bills this fall. It also avoids environmental and health problems caused by burning fossil fuels.

The study, performed by Montreal-based energy consultants Dunsky and Massachusetts-based Power Advisory, appears to provide some fodder for both arguments, but particularly the latter.

It estimates that under current projections in New Hampshire through 2035, distributed energy, mostly from solar panels, will raise the average bill of other customers – that is, will shift costs – by about 1%.

It also estimates the average bill of a customer with solar will be lowered by 92% under current projections.

At the same time, the study estimated that distributed systems such as solar will be worth between 9 to 12 cents per kilowatt-hour to the grid, roughly one-third the total price paid by residential customers in Eversource territory. That benefit mostly comes from having to pay for less fuel and do less transmission maintenance, plus smaller benefits from such items as administrative costs.

The financial benefit of solar varies widely from site to site and is dependent on the season and time of day. In particular, the study noted that the value of electricity from a solar panel can increase more than six-fold during times of peak need, partly because it can avoid what are known as capacity charges.

It also tiptoes around the difficult question of calibrating the environmental and health benefit of installing solar instead of burning fossil fuels to generate electricity. The study estimates what are known as environmental externalities but adds them as a sort of option to the financial benefit calculation. This estimate increased the financial benefit of solar by about half: In 2021, for example, the value of solar to the grid was pegged at 10 cents per kilowatt-hour but was 15 cents with environmental benefits added.

“This was never intended to spit out the quote-unquote ‘right’ number that would be plugged into any tariff going forward,” said David Wiesner, senior hearing examiner at the Department of Energy during an online presentation Wednesday. “They couldn’t study every possible permutation of load growth, distributed generation deployment or different sizes of installations. … It is really intended to be an exercise in evaluation … to provide an indication of potential avoided-cost value of distributed generation impact over future years.”

In particular, the study occurred before the sharp increase in the price of oil, gas and other fuels due to the Russian invasion of Ukraine which has led to a rough doubling of the energy portion of electric bills from all New Hampshire utilities. That automatically increases the value of having solar panels, although it’s not straightforward to calculate the size of that increase.

One other item noted by the study is that west-facing solar panels are more valuable to the grid as a whole than south-facing panels because they produce more electricity in the late afternoon, when the need for production is greatest.

Right now virtually all solar arrays face south to maximize the total amount of electricity they produce during the day. Creating time-of-use rates that paid more for solar power in the afternoon would provide an incentive to install more that face the setting sun or to install batteries that can shift power production to when it’s most needed.

The study did not examine the financial benefits of including storage, such as batteries, with solar.

A final version of the study will be given to the PUC by the end of October. Wiesner said the regulatory body would begin the process of looking at net metering with sessions in January.