When Granite State College merges into UNH, much will stay the same 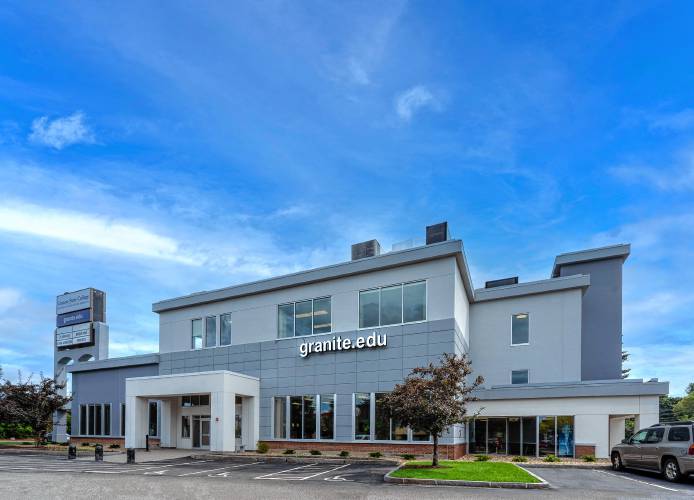 For the fourth time in its 50-year history, Concord’s piece of New Hampshire’s state university system is about to get a new name, part of a big change that should raise the profile of this often-overlooked institution but not alter its underlying mission.

“Most people haven’t heard of Granite State College. I’ll be talking to a neighbor about it and they’ll say, where’s that? If you say UNH they know what it is,” said Joy Acker, who was in many ways a typical GSC student – she got her bachelors degree at age 36 when she had four children – and now works as associate director of admissions operations.

As of next July, GSC will merge with UNH-Manchester to form the UNH College of Professional Studies. Advocates say the move will benefit both institutions.

For UNH-Manchester, almost entirely a commuter college, the big benefit comes from online offerings. Granite State College created internet classes as far back as 1999 and is now 100% online for students and staff, while the UNH campus has no undergraduate degrees that can be taken entirely online.

“UNH students have expressed interest in and a desire to have more online options available to them. Granite State understands how to stand up, cost-effectively and quickly, high-impact programs,” said Michale Decelle, Dean of UNH-Manchester. “We don’t expect to take on SNHU (Southern New Hampshire University) any time soon but UNH wants to be more of a substantial player in the online education arena.”

Granite State students, for its part, will get a connection to a research university as well as a more recognizable name on their diploma that could help with finding work or further education.

“Both institutions are doing fine from a budgetary standpoint … but the university system sees Granite State College as playing a role to allow for growth,” said Tara Payne, vice president of enrollment management for GSC.

That’s because Granite State College’s role has always been to provide education to “non-traditional” students who hadn’t gone straight into college from high school or who had begun college but had to stop taking classes. These older students are becoming more valuable to colleges as the Northeast faces a long decline in the number of high school graduates, and UNH doesn’t want to miss out.

“What we’re hoping through this merger is that, using the UNH brand … we’re really going to be able to bring more of what Granite State does to a much bigger and broader audience,” said Decelle.

“People come here (and say) I have all these credits, I have this life experience, it’s 20 years since I graduated from high school – how do I put it all together? ” said Payne. “In most cases, life got in the way: family, work, military service, whatever it may have been, something prevented them from continuing their education.”

Created long before the internet, the college has had as many as 9 separate campuses scattered around New Hampshire in places like Claremont, Conway and Nashua as well as Concord, to help students who couldn’t travel to the state schools in Durham, Keene or Plymouth. In recent years, online education has taken its place.

“Online became the predominant way we were delivering courses even before the pandemic. For at least 7 years, maybe more, you couldn’t complete a degree unless you took some online courses at Granite State,” said Payne. “First we were overcoming the barrier of location for students. Now it’s the barrier of time,”

These days virtually everything is online, not just classes.

“Students are getting all of their support – advisors, librarian, tutoring, career services – all online with Zoom, email, text,” said Payne.

And what about the Granite State College building on Hall Street, whose visibility from I-93 is the reason that most non-students even know the college exists? The building is owned by the school but most of it is leased to others, such as financial services firm Primerica, the New Hampshire Nurses Association and Capital Area Fire Compact. Staff and faculty use the GSC space for occasional meetings or to access supplies but “otherwise we’re fully remote staff and faculty at this point.”

GSC also has some rooms in the Brady Sullivan building in Manchester. The future of this space after the merger is still to be decided.

It’s hard to find a bigger advocate of Granite State College than Acker, the associate director of admissions operations.

She was five months pregnant when she graduated from high school. “I knew I wanted to go college but it was going to be someday,” she said.

“I got it in my head that I was going to learn Spanish,” she said. Her bank would help pay if the school was accredited so she signed up for an evening in-person Granite State class.

Through a series of coincidences, including a college admissions specialist standing in the bank lobby who overheard Acker talking about her wishes, she went from taking a single class on Friday to being fully enrolled in a degree program “that began the following Monday.”

She began in 2009 at age 31 and graduated with a bachelor’s degree in English language arts in 2014. That was, she wrote in an email, “a little longer than some students, but that’s because there were some terms in which I only took one course (baseball season was pretty hectic in my house).”

Acker said there were times when she was worried about school interfering with the family. “There were sporting events that I missed, and times I had to stay home and do my homework.”

But when time came for graduation, she said, her youngest son who was 8 told her, “I’m so proud of you mommy.”

“I thought I was sacrificing from my kids. I was actually doing this for them,” she said.

From being a typical student, Acker has become a typical employee in terms of GSC’s all-online status – she works out of her home in Waterford, Maine.

Initially, the merger will look mostly like two colleges operating under an umbrella name. All the GSC online courses will operate as a division within UNH College of Professional Studies while UNH-Manchester, which serves a largely traditional college-age population mostly with in-person classes, will have its own division. UNH-Manchester houses about 40 students in a small residential program in the Brady-Sullivan building but most of its roughly 1,000 students are commuters.

The schools’ courses will remain largely separate at first, although Payne said some may be “co-listed” to be taken by students in either division. Over time there may be more academic melding. Only the Manchester students will have access to the UNH facilities in the former Pandora Mill in the Millyard.

“We’re trying to leverage the best of both worlds while not disturbing what works well for both. It’s a tricky business,” Payne said.

As for cost, that will also be separate: Granite State students will face tuition and fees next year that are “comparable” to the current cost, and UNH-Manchester students will do the same, Payne said.

GSC costs currently run from about $7,800 a year in tuition and fees for in-state undergraduates to $11,000 for out-of-state graduate students. Between 80% and 90% of GSC students are in-state.

UNH-Manchester costs about twice as much: $15,800 for in-state undergrads living on their own up to $34,660 for out-of-state undergrads who aren’t part of a tuition-matching program among New England states.

Both schools offer a wide range of grants and scholarships. Half of Granite State College students are full-time Pell Grant recipients.

Granite State will remain an open-admission college without the need for standardized tests or other requirements beyond high school equivalency.

This semester Granite State College has 1,413 undergraduates pursuing two-year associate degrees or four-year bachelor degrees and 279 graduate students pursuing master’s degrees. Those numbers are down from some recent years but not necessarily because of the pandemic. Rather, the strong labor market has probably convinced some would-be students to keep working rather than enrolling.

About 15% of the current student body are affiliated with the military, often in the National Guard.

Granite State College currently has 87 full-time faculty and staff, and 17 part-time staff and 141 part-time faculty. Payne said no layoffs are planned as part of the merger.

As for current students, those finishing up this year will still have Granite State College on their diploma rather than UNH.

“I’ve heard mixed emotions from students,” Payne said. “Many think it’s a great opportunity, but some are trying to finish in time to get that Granite State College degree. It means something to them.”