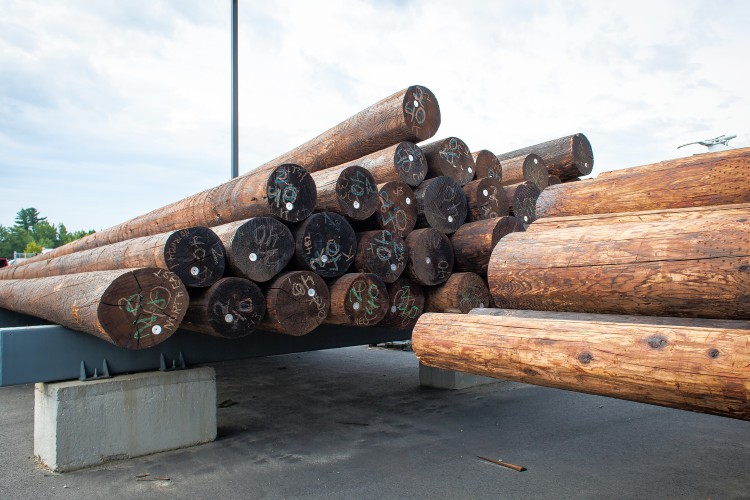 2016 photo: Eversource’s Hookset Work Center stores hundreds of utility poles of different sizes in preparation for installation. The poles are bought from a South Carolina firm that grows, cuts and treats them for many utility companies. Elizabeth Franz / Monitor staff

That’s my conclusion based on data from Eversource New Hampshire, the utility that covers the majority of New Hampshire, both geographically and in number of customers. In 2022, spokesman William Hinkle told me, there were a whopping 275 motor vehicle accidents with utility poles and took out power to 44,000 customers. Of those, 18,000 got their power back within five because because it was automatically rerouted through the network while the rest had to wait for a new pole to be brought out and installed.

Two hundred and seven-five times in one year, a car or truck plowed into a New Hampshire “telephone pole” (as I still think of them) hard enough to break it. That’s more than five times every week! Amazing!

If you add the poles taken out in the service areas of Liberty, Unitil and NH Electric Cooperative, I’m sure it would be aleast one a day on average.

Hinkle said in 2017, Eversource NH saw even more such accidents – there were 367 times a vehicle hit and broke a utility pole in their service area, and in 2021 it happened 280 times. People really are terrible drivers.

As a side note, I asked a question that occurs to me when there’s an ice storm that makes trees fall on electrical/phone/cableTV wires which then breaks utility pole(s). Why, I wonder, aren’t the connections made weaker so that the tree will rip the wires off, which would save the poles and great shorten repair times?