Syrup is a tradition-filled industry adapting to climate change 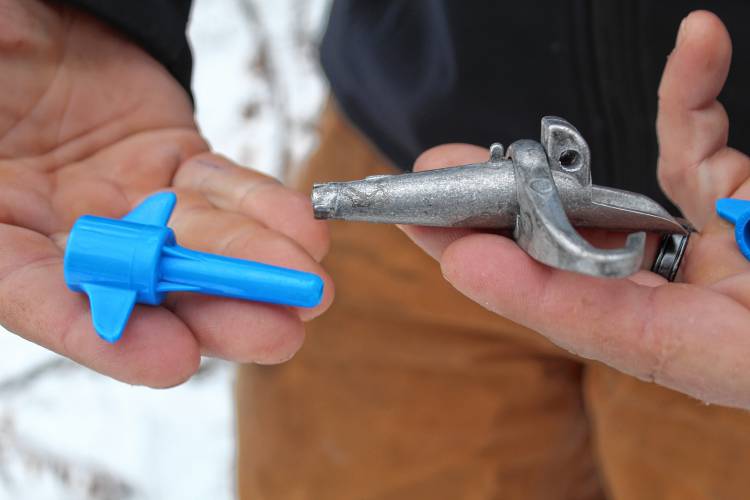 An example of a tap that uses vacuum technology, left, and an old-fashioned metal drip tap. Ashley Saari / Monadnock Ledger-Transcript

If you’re looking for an industry that is adapting to the pain that accompanies climate change, take a walk in a hardwood forest until you find plastic tubing stretching off into the distance. That’s the tradition-bound maple syrup industry tossing tradition aside.

“All this stuff is about being adaptable, so we can take advantage of the changes,” said Jeff Moore, whose family runs Windswept Maples farm in Loudon.

“Changes” is one way to put it. The record-breaking warm start to 2023, with people as far north as the Notches lamenting the lack of snow, underlines the way a once-predictable season for making maple syrup has been scrambled by the changing climate.

It used to be that trees were tapped in late January and into February, and sap was collected and boiled down to make syrup in February through March. Nowadays, the season starts and ends whenever producers can make it work.

This came to my attention when Ben’s Sugar Shack in Temple announced that they boiled sap on Jan. 1. That’s their earliest boil ever and might be the state record for the earliest commercial boil, but to my surprise it is not a New England record.

“Some Vermont producers are boiling before Christmas,” said Andrew Chisholm of Chisholm Farm in Hampstead, president of the New Hampshire Maple Producers Association. “We haven’t seen that in New Hampshire … but we may.”

Two things are making the sugaring season start earlier, I learned. One is climate, which brings more and earlier warming days, and the other is technology.

“There no doubt that we’re getting sugaring weather earlier, stretches that are longer and earlier. It’s not that we never used to get those periods where we could make syrup – we didn’t have technologies and practices to gather it,” said Chisholm.

Ben Fisk of Ben’s Sugar Shack agreed. “There was always an early January thaw. Now we can capture it.”

Sap runs up and down trees when the temperature is below freezing at night and above freezing in the day. (You can collect sap from many species of hardwoods but only a few, mostly maples and birches, have enough sugar content and the flavor to be worth it, with sugar maples leading the pack.)

New Hampshire winters have always included warming spots such as the famous January thaw, so it has always been possible to collect and boil sap earlier than the traditional season. That wasn’t done in the past because as soon as you drilled a hole in a tree and inserted a metal tap to let the sap flow out, you had only a certain amount of time before natural processes would shut it down.

“With the traditional spout and bucket, the tap will produce bacteria that closes up the sap channel of the tree,” said Chisholm. So tapping started relatively late to keep the channel open while sap’s sugar content was highest.

Technology has changed that.

Taps are now more flexible, adhering better to the tree and sealing off the hole, keeping bacteria out.

Tubing, which has been used for many years to collect sap from multiple trees at once, has improved. The exterior does a better job of gripping other trees as it winds through the woods and the interior is slipperier, making it easier for sap to flow. Tubing is now fused together to make longer runs instead of clamped together, reducing gaps where bacteria can enter.

The result is that large sugar operations have tubing that runs an incredible distance through the forest, collecting sap from scores of trees at once.

“Glenn Goodrich in Eden, Vermont, has some tubing systems that stretch for dozens of miles. From the last tap to the collection point is 7, 8, 9 miles,” said Chisholm.

Perhaps the most important technological change is the use of vacuum pumps to pull sap out of trees.

“One of the keys is turning the vacuum on at the beginning of a run and never turning it off, keeping it on 24/7 until the run is over,” said Chisholm. That helps keep out bacteria and allows the tap to stay open for weeks or months.

One result is that fewer taps are needed. In the old days, when buckets were hung on each tap, it was common to drill holes all around a sugar maple and ring it with buckets. Now, just a single tap per tree is often enough.

Remote sensing is also part of the equation, to help keep track of how well everything is working through the stretched-out season. So is osmosis, used by larger maple operations to concentrate the sap before they start boiling, saving money and energy.

Sugarbushes are starting to prep the woods as early as November so they can collect sap every time it runs, all winter long. This lets them compensate for our shrinking winters as the climate warms, a perfect example of adaptability.

Eventually, as everybody realizes even if we don’t want to think about it, the climate may change too much for syrup-making to compensate.  It’s going to be harder and harder for sugar maples to grow and thrive in southern New England or low-lying parts of northern New England and if you don’t have the trees, no amount of technology can compensate.

But for the immediate future, a changing maple industry is keeping up with a changing climate.

And thank goodness for it, I say as I pour maple syrup on my waffles.