Our ballot-reading machines are so old, they run on WinXP 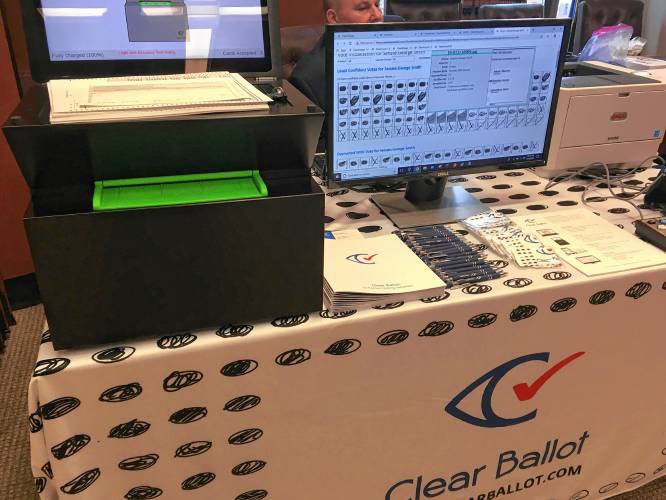 One of the potential replacements for AccuVote. The software flags "suspect" candidate marks, which are shown on the screen.

Any salesman knows that jokes have to be pitched to the audience, which explains why James Rundlett was confident Friday in the Legislative Office Building using a comment that would have bombed almost anywhere else.

“It’s not like it’s a DOS memory card,” said Rundlett, regional sales manager for a Boston firm called Clear Ballot, describing the removable storage in his company’s voting system. The more than 50 people crammed into the room burst into laughter.

That makes the gathering sound like a convention of programmers but it was actually a roomful of district moderators, town clerks and other election officials looking at options to replace the AccuVote machines that have been counting New Hampshire ballots for more than three decades.

The problem is that AccuVote machines aren’t being made anymore. LHS Associates, the New Hampshire firm that services them throughout New England, is reduced to cannibalizing old machines for parts such as its dot matrix printer or that joke-worthy memory card, which requires a working battery or else it will lose all the information about the ballots it has just counted.

“A bigger concern is the software,” said Jeff Silvestro, president of LHS. The AccuVote operating system runs on Windows XP, a variant that Microsoft hasn’t supported for years, leading to concerns about crashes and bugs that might raise questions about results.

On Friday the state invited four companies – Hart Intercivic, Election Systems & Software, Clear Ballot and LHS – to hold a small trade show on the third floor of the LOB, showing off their wares to potential customers. They also gave half-hour pitches to the audience.

There’s no schedule set for replacement, said Dave Scanlan, deputy secretary of state for New Hampshire, who oversees elections, but if there’s enough interest from communities that the state might go through the process of certifying ballot-counting devices other than AccuVote.

As is required by state law, all the systems work by optically reading paper ballots. Purely digital voting systems that don’t use paper ballots are not allowed in New Hampshire. Communities that count ballots by hand would not be affected by any change.

LHS not only services AccuVote but is selling an updated variant of it, which was approved for use in Massachusetts in 2014 after a certification process that lasted a year and a half.

In New Hampshire any other vote-tallying system would have to go through a similar process, getting approved by the Ballot Law Commission and possibly require some legislation changes before they could be used in elections, all of which can take years. An attempt to allow electronic polling books rather than paper voter records in state elections has been in the works for at least two years with no end in sight.

That time lag is a concern to some.

“We should have been doing this years ago,” said Rodd Rainier, town clerk from Hooksett, who was in attendance with deputy clerk Billie Hebert and Marc Miville, town moderator.

The AccuVote machines “work awesome,” Rainier said, but are showing their age. “Everything has a finite life span,” he said. “Obviously, the writing is on the wall for them.”

The small town of Grantham has seen this coming for years, said Town Clerk Kenneth Story. Grantham has been putting away a bit of money each year, building up a fund for when it comes time to buy new systems, which cost $5,000 or more per unit.

Friday’s corporate pitches demonstrated how running a polling place in 2019 is a mix of the geeky and the pragmatic. Discussion of “pixellation recognition systems” and “marginal mark detection” drew nods of understanding, but so did discussion about whether a machine could fit into a station wagon to be hauled out of storage as election day approached.

And then there’s “the pen-tip person,” Silvestro’s term for voters who absentmindedly tap their pens onto the ovals next to a whole bunch of candidates’ names while making up their mind, creating uncertainty about who they actually voted for. Groans of recognition filled the room when this habit came up.

Dealing with such uncertainties is one of the hardest things for vote-counting machine to do. These uncertainties include “overvotes” in which people mark more candidates in a race than there are open slots, sloppily written write-in candidates, or marking votes with circles or smudges or checkmarks rather than filling in the oval as requested.

Most of the vendors deal with uncertainty by taking digital images of every single ballot and using software to focus on questionable areas, noting that polling officials can look at the digital image themselves to make decisions – or, of course, always go back to the paper ballot.