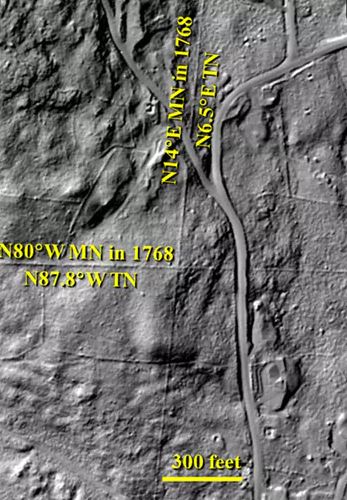 Comparing orientation with true north provides the magnetic declination at this location when boundaries were surveyed in 1768. (John Delano SUNY-Albany)

Old-time stone walls in New England were often built along property lines and property lines were often laid out along compass directions. Ergo, they inadvertently provide a record of changing magnetic declination cause by the slow movement of magnetic north.

That cool realization came to SUNY-Albany professor John Delano who confirmed his hunch with some walls in Stoddard, N.H. Here’s his article writing about the project.

He found walls with LIDAR maps of the sort I wrote about earlier this year as part of the Stone Wall Mapper project.

FYI, that project has now mapped 4,700 miles of stone walls – more than 50,000 of them – from LIDAR pictures. Only 4 of those walls have been “verified” on the ground, however.