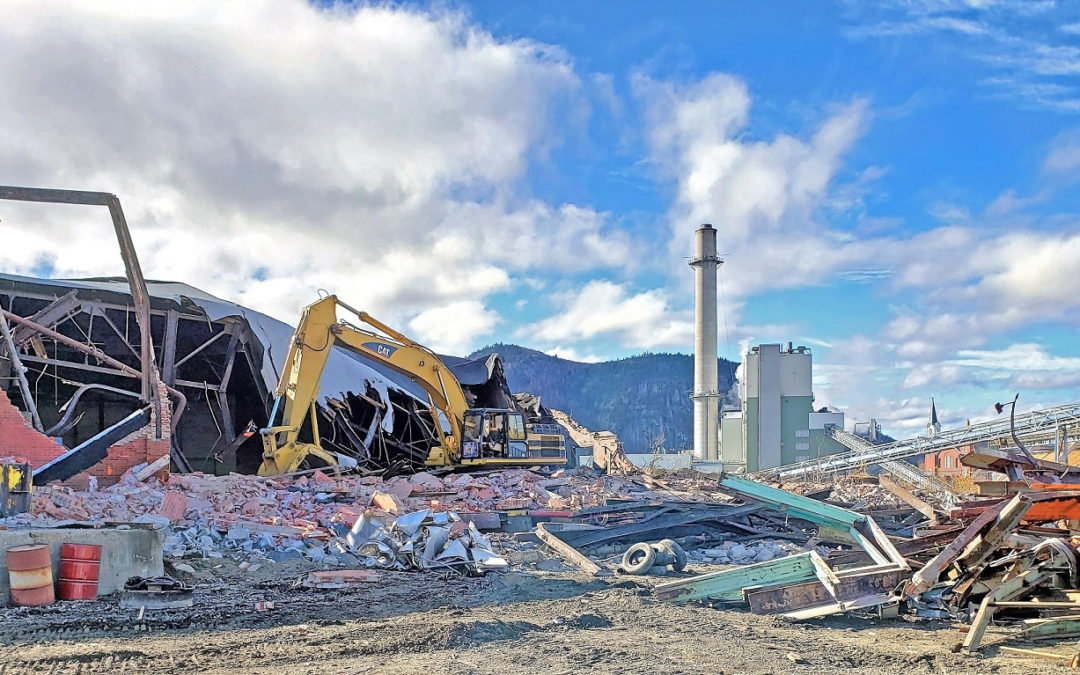 Whether it’s good or bad to burn wood to create heat and/or electricity is a contentious topic that has been featured here more than once.

It has risen to the fore again in New Hampshire because of the shutdown of some biomass electricity plants up north as part of a long battle over power payments, and also because of debate around Dartmouth’s proposal to switch much of the campus to wood-fueled district heating. NHPR has a nice overview of the complexities of the Dartmouth plan here.

One thing that’s clear is that burning wood only to produce electricity doesn’t work economically and probably not environmentally. Biomass power has to be “co-generation” – producing both electricity and heat – to make sense. Since it’s hard to move heat, that means you have to find a use for hot air or water very close to the power plant.

That’s why the Burgess Biopower in the city of Berlin, NH, which turned a closed pulp mill into a power station, has just torn down a warehouse. It’s using a $500,000 grant o support a greenhouse to use the plant’s waste heat:

A  to-be-announced company will build and operate a $25 million, 190,000-square-foot hydroponic greenhouse. … The greenhouse developer looks to finalize its co-location agreement, begin construction in Spring 2020 and open in 2021. The facility expects to produce one million pounds of baby leafy greens, such as spinach, arugula and kale, annually for local and regional distribution, and provide approximately 30 full-time jobs once operational.

I mentioned this plan back in the spring; nice to see it’s moving ahead.