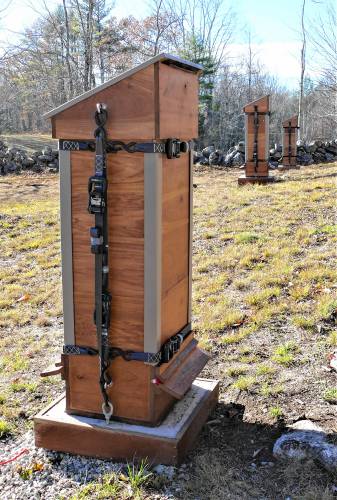 The design and construction of beehives seems like a long-solved problem. Aside from occasional tweaks, there’s nothing left to figure out.

That’s roughly what John Rocheleau of Sandwich thought when he set up his first hive three years ago as an extension of his interest in organic gardening. But it’s not what he thinks any more.

“I probably built about 20 prototypes,” said Rocheleau regarding his Bee Fortress design, which he hopes to turn into a business.

In a recent interview he ticked off the design variants he went through after losing his first colony to cold over the winter, a problem that kills almost 10% of the hives lost to state beekeepers each winter. Between one-quarter and one-half of the state’s honeybee colonies die each winter from a variety of causes, leading Rocheleau to think that people would be willing to pay for a hive design that would cut back on those losses.

The 58-year-old Rocheleau, a North County native, didn’t change innards such as the frames on which bees build their honeycomb and which have been perfected over many decades as part of what is known as the Langstroth hive design. He concentrated on the exterior.

He started off building a shelter that could be placed over hives and heated, then turned his attention to ways to allow bees to get in and out while controlling temperature and humidity inside the hive. That played into his experience as a developer and entrepreneur of climate control systems, including hot water heating circulators that “stem from my flange and valve inventions that I created on the corner of Warren and Rumford streets” in Concord years ago.

Along the way he tried an Indiegogo push to raise money but people balked at the cost – “they would leave comments like, ‘Oh, next it’s going to have a gold-plated toilet,’ ” he said – so he tosses out the idea of a separate shelter as well as a metal pipe entrance that worked well but proved far too expensive. Instead he worked on exterior ways to allow better temperature control, to limit build-up of condensation, and to control entrance by wasps and other predators.

The final touch came after a bear did damage to some hives. More work went in to developing a hive that can resist the interest of a 300-pound bruin while still being made of wood and light enough to be handled by beekeepers, using strapping and other fortifications.

Bears are not a major problem for New Hampshire beekeepers – they were the cause of about 2% of colonies lost in New Hampshire last winter, according to a survey from the New Hampshire Beekeepers Association – but they can do huge damage if they get past the electric fencing that is commonly used.

Rocheleau says he has also developed an attachment that goes on top of the hive to control Varroa mites, which are by far the biggest cause of honeybee colony death, but declined to give specifics.

Now he has a website offering the Bee Fortress, as he calls it, and in the position of many inventors, looking for funding to enable production.

“It takes two men 8 hours to make one of my hives. If we can cut that time in half by automating with a CNC router, might bring down price point to where we could make some here, hand-crafted, sell them as the most technologically advanced, highest quality, beehive,” he said.

Full-scale production, he said, would almost certainly have to happen overseas because of lower labor costs.