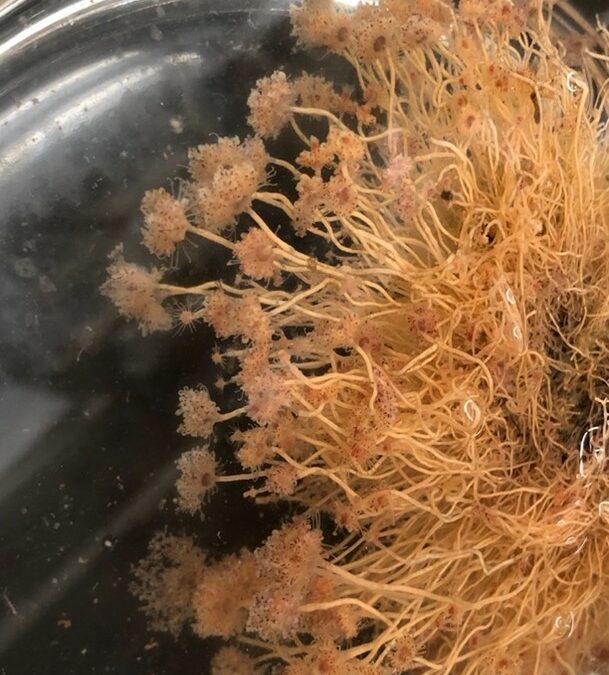 A colony of Ectopleura (UNH photo)

The simple creatures that eventually evolved into us wanted to enjoy sensory input rather than never having to shuffle off this mortal coil but plenty of others made a different choice, including one that is now a problem for New Hampshire oyster farms today.

This scenario is, roughly, an intriguing possibility that has come out of research at UNH into the cellular workings of a tiny jellyfish-like creature. It’s a classic case of studying one thing (how to keep ocean equipment from getting fouled) and finding insight into a totally unrelated field (how our sensory organs, and maybe our brains, evolved).

The creature in question is Ectopleura crocea, which in the prime of life is a tentacled blob about the size of a capital O in the Monitor’s newsprint.

“They’re a whitish clear color, so when they’re in the water you can’t see them. But you can see their colonies. Look at any dock in the ocean, they are covered with these clumps of orange Ectoplura,” said Sydney Birch, a doctoral student of molecular and evolutionary systems biology.

Birch is doing research with David Plachetzki, Ph.D., an associate professor of molecular, cellular, and biomedical science at UNH who has long been interested in tiny water organisms such as hydra. When he came to UNH from California he searched for a similar beast; it wasn’t hard to find.

“If you go underwater in June or July there’s Ectoplura everywhere,” Plachetzki commented.

Owners of hard optics in the water would love to have a way to keep Ectoplura from settling all over their equipment. The state’s booming oyster farming industry hates the stuff because it fouls nets and equipment, limiting water flow and reducing the spread of nutrients.

That problem provided an incentive to study it, as well as funding.

Birch says she started out with a pretty straightforward experiment about Ectoplura, with samples gathered from docks up and down the New England seacoast. One thing she had to keep in mind: Marinas’ power-washing schedules. Once a dock is cleaned, it takes weeks for the population to regrow.

Ectoplura is like the butterfly in the sense that it has a complex life cycle, part of which involves changing from floating larvae to locked-down teenager.

“It’s the actual larvae that is the issue. They are the ones that pick where to settle, metamorphose, turn into adults. I wanted to figure out how they’re making that decision. What are the cues? What are they sensing that indicates: ‘This is where I should live,’ ” she said.

Birch built a series of test boxes (not easy during COVID-19 shutdowns) in which she exposed populations of Ectoplura to different lights, chemical cues and textures, then measured what happened. One discovery: They don’t like red light, a color that’s not encountered underwater. It might be possible to reduce buildup with some cheap LED lights; more research is coming.

That’s all well and good but the most interesting thing happened when Birch combined cues, adding frequency light with that chemical, this other chemical with that texture, and so on. Ectoplura behaved differently for certain combinations, she said.

So what, you ask? Well, this type of multisensory integration is supposed to require a brain but Ectoplura doesn’t have one. It’s just a disorganized web of neurons.

“If you don’t have a brain then how do you integrate the senses?” Plachetzki  said. “We know they’re doing it from behavior, but we don’t know how. They’re doing it either on the level of the cell within a neuron, which is not how animals like humans do it, or maybe neurons connecting in a way we don’t understand.”

The intriguing possibility from an evolutionary point of view is that something is happening inside individual cells that lets them integrate different types of sensory input. If that’s the case, it provides insight about the point where simple single-sensory-input cells evolved into multi-sensory-input cells, an important step in the evolution of brains.

“It does have to do with this question of how nervous systems function. This suggests ancestral cell types had this sort of capacity from which other senses sprang,” Plachetzki  said.

Birch says she suspected something was up while running the experiments but needed analysis to confirm it.

“Once you start analyzing the data and making graphs – that’s when things were like, this is really cool!” she said. “This was super crazy. Dave and I talked about this a lot, we realized there was an additive effect.”

In the tree of evolution (which is more like a snarled bush but we’ll stick with the simple metaphor) Ectoplura split off from the branch that eventually became all animals and fish and birds about 700 million years ago. That’s before any animal fossils exist so it’s hard to know what happened; it fascinates me that studying glop scraped from docks along the New England seacoast may give us a clue.

And what about that hint of immortality? It seems that not evolving eyes, ears and brains has a benefit.

“What they gain is that they can regenerate very easily,” said Plachetzki, talking about the phylum Cnidaria, which includes jellyfish and Ectopleura. “There are Cniderians that are potentially immortal. We have Cniderians in the (UNH) lab that have been there for 50 years, we’ve been studying them all along.”

So it seems evolution presented multicellular creatures with a Sophie’s Choice: If you become complicated enough to see, hear, taste and feel the world around you, you’ll break down as the years go by, and eventually die. It’s a choose-your-own-adventure game for the ages.

Birch is preparing publication of the study as part of getting her Ph.D. The two might also run a couple of quick and easy experiments to see if red-light LEDs can scare off the larvae and inhibit fouling.

For his part, Plachetzki is a bit dubious. “Maybe,” he said, “but life finds a way.”