N.H. (like many places) has a tradition of hermits living in the wood 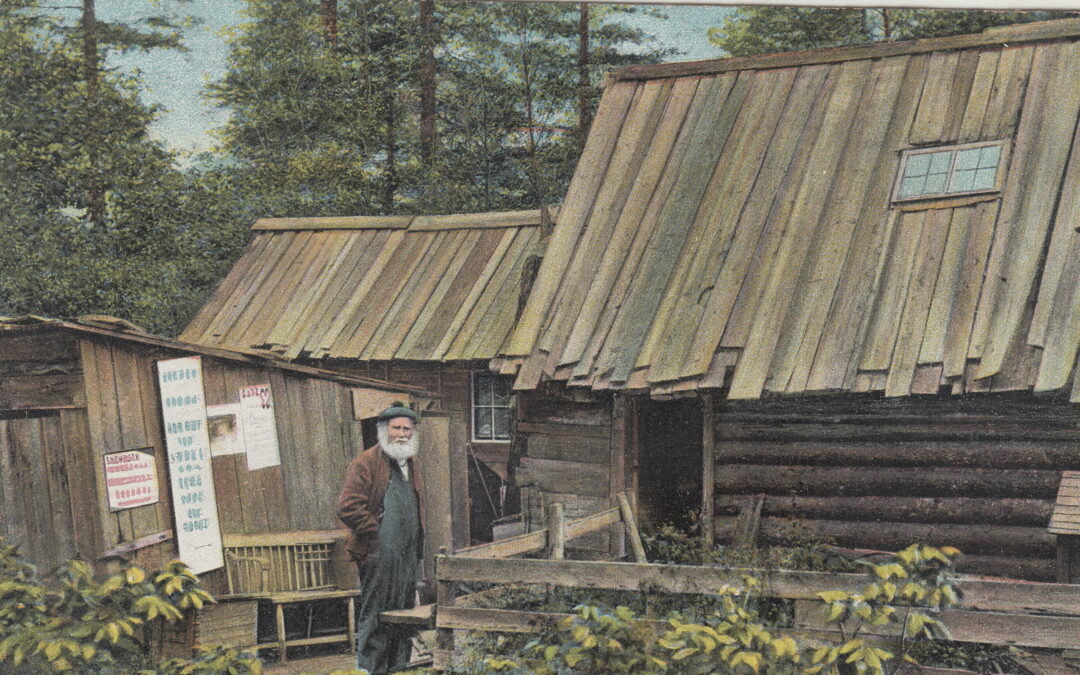 A postcard about English Jack, the hermit of the White Mountains - courtesy Janice Brown, cowhampshireblog.com

(This story isn’t exactly geeky but I thought it would appeal to geeks, who often dream of becoming hermits. It was prompted by an ongoing situation with a guy who was forced out of his off-grid woodsy cabin; I won’t link to any stories because it’s changing every day.)

Long before “River Dave” there was The Taylor Pond Hermit.

Among those visitors was Janice Brown of Merrimack, who has compiled information about Swett and several other New Hampshire hermits on her history blog, Cow Hampshire (cowhampshireblog.com)

“I visited him probably a year or so before he died. I went into his house, he had a wood stove that he cooked on and heated with. It had coated every surface with a very thin layer of – I don’t want to call it creosote, but you know where if you burn wood you get a sort of film,” she recalled. “He said I could sit down but I didn’t. My backside would have been covered in black dust.”

His granddaughter, Sheila Swett, wrote a biography about him, Perley: The True Story of a New Hampshire Hermit.

The idea of a hermit is not unique to New Hampshire, of course.

“They were eccentric, like to live far away from most people, socialized from very little to none,” said Brown, summarizing what makes us consider somebody a hermit.

Like River Dave, these men – all are men, so far as we know – stayed away from society in homes they built themselves, usually on land they didn’t own, but they weren’t hidden. Many were the subject of stories in newspapers of the era, and some were featured on picture postcards that still show up in antique bins or are offered for sale online.

English Jack made souvenirs like walking sticks that he sold to visitors. Shiff the Gunman, a 75-year-old hermit in North Woodstock who died in 1952, used interest about his lifestyle to become a well-known gun dealer out of his shack during the Great Depression.Support the Concord Monitor. Subscribe Today

A 1938 newspaper clipping provided by Brown said Shiff’s “dislike for President Roosevelt is almost a religion … He composes letters and poems condemning the president and mails them to newspapers.” One online comment attached to a photo of Shiff says: “He used to have a Franklin dime on the floor and as you came thru his door, you were required to stamp on that dime!”

What causes someone to be a hermit varies. Romance is one reason: Perley Swett fled society out of anger over his divorce settlement, according to a 2020 article in New Hampshire Magazine. Finances may be part of it but not always; voluntarily becoming a hermit is different from being forced by circumstances into homelessness.

“Sometimes people have this idea that hermits are poor people, but that’s always true,” said Brown.

Jarvis Smith in Mont Vernon disputed stories that a sour love life drove him into the woods but two articles reprinted on Brown’s blog say he wouldn’t give any other reason. The stories emphasize Smith’s eccentric behavior, including entertaining visitors from the big city – Mont Vernon was a summer hotel destination through the 1920s – by burning off his whiskers.

A 1906 article in the Augusta, Ga., Chronicle put it this way: “After dipping a piece of wood into kerosene oil and igniting it, he starts to work. With a burning torch in one hand and the other as a ‘fire extinguisher,’ he singes one side of his face and then the other. … While he crops it down about as close as the average man does with a razor, he very rarely burns himself.”

He started the practice, the article says, because it was too dangerous to shave himself with a straight razor.

Perley Smith was the last hermit Brown knew of until stories about River Dave appeared. She’s not sure whether there are fewer hermits these days, perhaps because of better record-keeping about properties, or whether they’re just more secretive. She’d love to hear more about any cases.

“My interest in hermits goes back to first grade,” said Brown. “A kid called my dad a hermit and I punched him. I didn’t even know what it meant.”