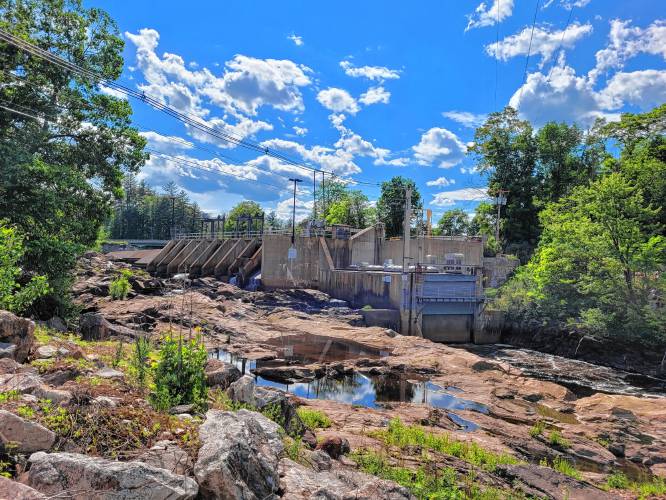 The Penacook Lower Dam on the Contoocook River is seen on Monday, June 6, 2022. The City of Concord is now sourcing 98% of its electricity from the dam through a new net-metering agreement. Sarah Pearson—

A city looking for 100% clean electricity could hardly ask for anything better than three hydropower sites within its borders, so I’ve often wondered why Concord doesn’t make more of a splash, so to speak, with the three small dams in Penacook.

Wonder no more. As of June 1, Concord government will be getting virtually all of its electricity from Penacook Lower, a 4.6 MW dam on the Contoocook River on the city’s northern border (a tiny part is in Boscawen) owned by Boston-based Essex Hydro, known locally as Briar Hydro.

Sounds simple, but that word “getting” hides a lot of complications. It’s not like somebody turned a switch and now all electrons from Penacook Lower are headed to city facilities. They still flow into the overall grid and are controlled by the utility, Unitil.

The changes that kicked in on June 1 were financial – and bookkeeping-related. Not trivial to implement, and still important.

Concord is the largest of five municipalities and school districts in a group net metering program built around the dam made possible by a new state law that expanded the maximum size of such projects from 1 megawatt (the power used by roughly 700 to 1,000 homes) to 5 megawatts.

“It’s like you have a community solar farm, but this is a community hydro project,” said Madeleine Mineau, COO of Essex Hydro, which owns the three dams on the Contoocook. Four smaller municipalities that are also Unitil customers are part of the group.

Concord has wanted to use group net metering or other financial and regulatory structure to tap clean power for some time.

When the state allowed larger group net-metering programs, “we started to have discussions between the city and Briar (Hydro),” he said.

That expansion, by the way, feels like it was the absolute minimum that the governor and GOP-controlled legislature thought they had to do in order to run some “I’m a green candidate” ads without actually being green, which might anger supporters. While the expansion is welcome, it doesn’t do much to stop New Hampshire from falling further behind in the race to a 21st-century economy. But I digress.

Since June 1, as long as Essex keeps track of the members of this net metering group to ensure that nothing horrible happens like a big New Hampshire employer reduced its electric costs by pretending to be a town (among the legislature’s pointless limits to their grudging expansion was not letting businesses and residences participate), then they’ll receive credits from Unitil, a portion of which they’ll disperse to their members. The contract covers roughly 40% to 45% of the dam’s annual output, Mineau said.

The contract with Concord covers 9 million kilowatt-hours of usage a year, which LeBrun said is about 98% of the city government’s annual needs. If Concord hadn’t switched all those street lights to LEDs, incidentally, it would only cover about 91% of annual electricity needs – a perfect demonstration of why energy efficiency pays off.

Concord expects its share of credits generated by the project to be “approximately $100,000 per year for 18 years” to help cover city electricity costs.

Above and beyond money, an official statement of the decision says the move “furthers the city’s objective to support renewable energy project development and operation in Concord.” And that, of course, is the whole point.

Net metering programs exist to provide financial incentives to build and maintain clean energy – incentives that don’t exist in a financial and regulatory system built over a century by totally different types of energy producers.

Penacook Lower dam is going through relicensing, as all dams must do every 40 years or so, and that is a long, expensive process. I’m sure Essex Hydro did a return-on-investment calculation when deciding if it would just be cheaper to turn off the dam and go home; the extra income from group net metering is the sort of thing that can make the difference in such calculations.

“This gives us certainty,” said Mineau. “Knowing that a program like that is in place gives us confidence to make those significant investments to keep going.”